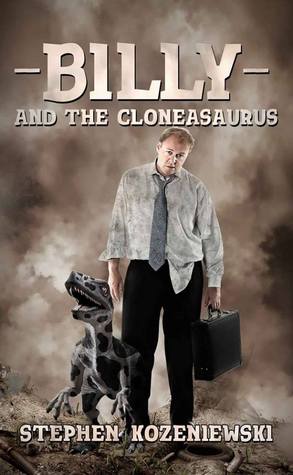 Billy and the Cloneasaurus is a fascinating satire set within a science fiction story.  The story is gripping, darkly humorous, and interesting, though there are parts that did not sit well with me. I enjoyed how the novel made me think and the journey of self-discovery that our hero embarked on.  I also enjoyed how the author balanced the rather gruesome details with humor.

The story is set in a futuristic world.  I’m not sure if it is post-apocalyptic, but it is certainly dystopian.  It reminds me of 1984 or Fahrenheit 451, but it is supposed to – the novels are even referenced in the story.  There are no women in this world, just men.  Not only are there only men, but they are all about 40 years old, and they are all the same.  Not just the same, identical.  It was confusing at first since all the Williams clones refer to themselves and each other as Will (although our hero utilizes their numeric identifier to himself).  As the novel unfolded it took time to understand the nuances of it.  However, it does help to draw you into this strange world, where Williams only live 365 days.

What I enjoyed immensely about the storytelling was that we learn about this world from William 790-6 (57th iteration), who is learning it all himself.  The novel opens on 790’s last day.  In fact, it is his final hour as he waits in line at the whirling fans of death (the humor is a bit dark at times).  When by some strange twist of fate, the clone before him didn’t take off his watch and thoroughly jams the machine.  Therefore 790 found himself with an extra day of life since it is close to quitting time and Williams do not do overtime.  As 790’s life unexpectedly extends, he begins to truly look around himself and question his existence.  The picture isn’t pretty; the world isn’t the utopia it appears.  Williams are bred to be money making machines for the Corporation.  Not only do they work hard (well, except they do like to sneak out a few minutes early) but they spend their money hard.  All of which benefits this mysterious Corporation.  790’s path of self-discovery is at times charming and funny and other times painful and difficult.

I struggled with rating this novel.  I was completely sucked into the story and 790’s plight, but similar to those classic books referenced earlier in my review, I am sad to say there isn’t a happy ending.  I do not mean to spoil, but it surprised me.  The beginning of the novel is a bit gruesome with the discussion of the deaths of other Williams; it ends a bit gruesomely as well.  Not that it is gratuitously described – it is not.  But the situation is described enough that my imagination filled in the details making ending far worse for me than the beginning.  It truly bothered me.  But as a satire, it is supposed to bother me because it is to make me think.  It is a well-written illustration about the dangers of consumerism, blind faith in our leaders, and the horrific extent some could go to for profit and maintaining a status quo.  The novel sticks with me though, I find myself pondering it – trying to think of how the ending could have been better.  Sadly, the ending fits – though I wish it didn’t.  I find it difficult to say I enjoyed the novel when I was so saddened by the end – but I did truly enjoy the journey overall.

Billy and the Cloneasaurus is a fascinating and darkly humorous look at where our world could end up.  Though I did not care for the tragic ending, the journey that 790 traversed was well worth the read.   I truly enjoyed how Mr. Kozeniewski blended dark humor, character development, wit, and satire in this science fiction story.  If you enjoy a story that sucks you in, makes you laugh while also may make you sad (and definitely makes you cringe) but most of all makes you think, you really should give Billy and the Cloneasaurus a try.

My Rating:  A- Enjoyed

Six billion identical clones make up the entire population of Earth, and William 790-6 (57th Iteration) is exactly like everybody else. In his one year of life he will toil in suburban mediocrity and spend as much cash as possible in order to please his corporate masters. When 790’s first birthday (and scheduled execution) finally rolls around, a freak accident spares his life.

Living past his expiration date changes 790 profoundly. Unlike other clones he becomes capable of questioning the futility of his own existence. Seeking answers in the wilderness, he discovers a windmill with some very strange occupants, including a freakish, dinosaur-like monstrosity. Which is especially strange since every animal on earth is supposed to be extinct…

Dark, haunting, and blisteringly satirical, BILLY AND THE CLONEASAURUS is the story of one “man’s” attempt to finally become an individual in a world of copies.

Purchase Info:
Billy And The Cloneasaurus

8 responses to “Review: Billy and the Cloneasaurus by Stephen Kozeniewski”