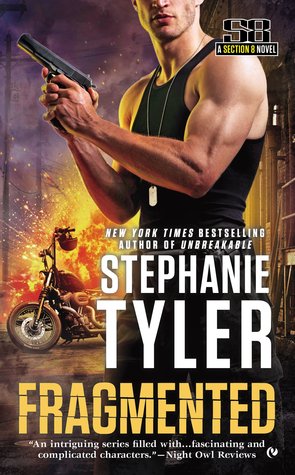 Brought into the Section 8 team under unfortunate circumstances, Dr. Drea Timmons decided to stick with the covert ops group to hide from her ex Danny and his motorcycle club, Outlaws Angels. However, after an accident on their last mission, Drea ended up losing many of her memories, including those of her new friends and romantic interest, Jem. With help from friends, Drea is trying to piece together her life and stay under the radar.

Jem has fallen hard for Drea, but won’t make a move until she remembers everything about him, both the good and the bad. Feeling he’s unworthy of her advances and too dangerous to make a commitment, Jem fights his emotions and tries to stay focused on Section 8’s mission to stop human traffickers. But when Drea’s safety is compromised, Jem realizes he is the only one who can protect Drea, regardless of his own deadly situation.

Fragmented begins immediately after the preceding story, Unbreakable, but then quickly jumps months ahead in time. One thing that I really liked about the opening chapters of the book is how the author uses Drea’s efforts to recall her own memories as a means to remind readers of the complex and complicated history of Section 8 and events from the first two books. When I originally read those titles, I found much of the world building confusing. Using Drea’s recovery flows well and allows newcomers to jump into the series as well.

I really enjoyed the first half of the book as Drea slowly comes to remember her time with Section 8 and her feelings for the handsome Jem. The couple works well together; smoldering sexual tension coupled with raw and honest emotions. Jem’s conflicted feelings – pulling him towards Drea while simultaneously trying to keep her at a distance – add fabulous anticipation to the brewing romance. I also appreciate that the author didn’t wait until the end of the story for Drea to recover her lost memories.

There is a big shift in the storyline midway through the book, and I didn’t enjoy the second half of the story as much as the first part. After Section 8 completes its mission, they suddenly find out that they are under surveillance and wanted by the feds and a group lead by the wealthy Ethan. In addition, the federal government is after Drea because of her history with Danny. While the first half flowed well and was fairly straight forward, I felt the second half was confusing and held too many small inconsistencies and contradictions. A couple of these concerns really bothered me, like the fact that Ethan didn’t recognize Key, a man he’s been hunting for who knows how long, in the club. Unfortunately, these issues took away from my overall enjoyment of the book. In addition, Drea and Jem began fighting and there was too much back and forth, causing me to lose some interest in their relationship.

In the end, I really liked the first half of Fragmented, but I felt the second half became confusing, and I started to lose interest in the couple and overall story. However, Drea and Jem make a great team, especially in the beginning, and I do like the overall outcome of the story. I am also very interested in what the future holds for Section 8 and what roll Ethan will play. Even though I wasn’t fond of how he came into Section 8’s world, I do like the possibilities his character holds.

WHEN THE RISKS ARE THIS GREAT…

When Dr. Drea Timmons was kidnapped during Section 8’s last mission, Jem did everything in his power to rescue the woman he’d fallen for—a woman unwillingly recruited for one of S8’s most personal and dangerous covert operations. Drea survived, but at a price. The trauma of her capture has rendered her without a single memory of her ordeal—or any recollection of how violently unpredictable her ex-boyfriend, Danny, an Outlaw Angel, had become, or why she had left him.

IS TRUST EVEN AN OPTION?

When Danny threatens to turn Drea over to the feds, she is forced to go on the run and confront a past that is as deadly as her future. As trouble closes in on both ends, Drea has no choice but to trust Jem, the only man who can help her, the only man whose electrifying touch brings back memories—piece by piece—too stirring to forget.