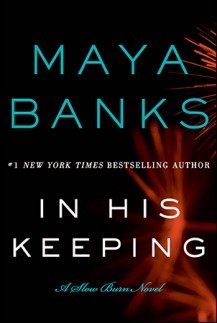 In His Keeping
Author: Maya Banks
Reviewer: VampBard
Rating: A-

I ate up this book. Literally. I would have read it in one sitting, if I’d had the time. That’s usually the case with Maya Banks’s titles, though. Especially the Slow Burn series. In His Keeping was no exception.

Take a little Alpha male, a damsel-in-distress, some paranormal abilities, a dash of kidnapping and you’ve got the wild roller coaster that was In His Keeping. The action kept me riveted to this title, and looking forward to the next title in the series.

What drew me into the story was the love that Ginger and Gavin had for Ariana. The lengths that they would go to, in order to protect their daughter. I think that the exploration of how much Ari was wanted pulled at my mom-heartstrings, and kicked in my mom-instincts as I read. It was pretty cool that Ginger and Gavin played a pretty significant role in the story, too.

Ariana is super naïve when the story starts. She knows she has telekinesis, but she’s had to hide this aspect of herself for her entire life. Only her parents knew. Her over-protective parents. She’d never used her ‘gift’ purposely. She’d always been careful, so she wouldn’t be discovered. With an event that happened to bring her powers into the public eye, Gavin and Ginger do what parents do best: protect their kids. Only, things don’t go quite as planned. In the end, Ari ends up being totally kick-ass. I want her on my team.

Beau. Broody, Alpha, and in control. He comes into Ari’s life at a time when she needs a protector, and someone to help her make sense of all the chaos that surrounds her. Ultimately, what I liked most about Beau is that he wasn’t afraid to let his emotions show with regard to Ari. And it was totally out-of-character for him. This tough guy, the one who is all ‘protect and serve’, is brought to his knees by a slip of a woman that has wormed her way into his heart. His worry about her is intense, and made my own gut churn with concern.

What I liked most about In His Keeping was that differences were celebrated. Ari wasn’t deemed as damaged and didn’t need ‘fixing’. She was believed in and not viewed as a ‘freak’ because of her gift. The fact that she eventually embraced her gift to protect and save those she loved endeared her to me as a powerful and believable character. The love between Ari and Beau was intense and believable. I felt their connection the moment they met, and that connection endured throughout the story. Which made me even more eager to see how things turned out for the couple.

Ms. Banks’s Slow Burn series is definitely a page-turner. Fans of her writing should definitely pick it up. Be ready for a roller coaster ride!

Abandoned as a baby to a young wealthy couple and raised in a world of privilege, Arial has no hint of her past or who she belonged to. Her only link lies in the one thing that sets her apart from everyone else—telekinetic powers. Protected by her adoptive parents and hidden from the public to keep her gift secret, Ari is raised in the lap of luxury, and isolation. That is, until someone begins threatening her life.

Beau Devereaux is no stranger to the strange. As the head of Deveraux Security, he’s more than familiar with the realities of physic powers. So when a family friend approaches him about protecting his daughter, he’s more than ready to jump on board. What Beau isn’t prepared for is the extent of his attraction to his beautiful and powerful client. What began as a simple assignment, just another job, quickly turns personal as Beau discovers he’ll do anything at all to protect Ari. Even if it costs him his life

Reviews in the Series:
Keep Me Safe by Maya Banks (Slow Burn #1)

Thank you to the the publisher who is giving away one (1) print copy of In His Keeping to one commenter. To enter to win a copy of Ms. Bank’s book, complete the Rafflecopter form AND leave a comment at the end of this review telling us which 2015 release you are most anticipating. Giveaway open for period noted on the Rafflecopter form. Winner(s) chosen at random from all eligible entries. This contest is open to US & Canadian mailing addresses only, where not prohibited by law. Open to participants, 18 years or older, who are legally allowed to participate in such a contest as allowed by their local laws. All federal, state, local, and municipal laws and regulations apply. Void where prohibited. No purchase necessary. By participating in the contest, participants agree to be bound by the decisions of the contest sponsor. Prize will be delivered by the author. This blog, its reviewers, and the owner are not responsible for items lost in the mail. By entering this giveaway, participants agree to abide by these terms.

16 responses to “Review + Giveaway: In His Keeping by Maya Banks”