Liberty and Other Stories
Author: Alexis Hall
Reviewer: B.
Rating: A+

Liberty and Other Stories is a remarkable telling of the various backgrounds and evolutions of the crew of the Shadowless (Byron Kae’s aethership), who were introduced to us in Prosperity. Through Piccadilly, Mr. Hall gave us expertly delivered teases and glimpses into their respective pasts, which were just enough to make me insanely curious about how they all came to be in the skytown in the first place. This assortment of hearsay, correspondence, and recollections provides some of those answers.

As usual, Mr. Hall has proven himself to be an exceptional writer, bedecking the journey with subtle moments of insight almost carelessly, their influence often lingering in the aftermath. Each story can be read independently of the other, but I recommend reading them all, as the rest of the narratives and content, with the exception of Shackles, all add tremendously to the reading of both Prosperity and the final story, Liberty.

Shackles explains how Ruben Crowe met, and fell for, the recently fallen “crime prince of Gaslight,” Milord. While it wasn’t my favorite of the four, it is still interesting for both everything we learn about Milord and the effect that information, as well as the man himself, has on Ruben. We also find out why Ruben broke with the Church and see more of the workings of Milord’s world as a whole. Shackles contains one explicit sexual interaction (for those in need of warning) and seems to be primarily designed to answer questions raised in Prosperity, as neither Ruben nor Milord play a direct role in the happenings of Liberty.

Squamous with a Chance of Rain describes how Miss Jane Grey, navigatress of Shadowless and friend of Captain Byron Kae, began her journey towards insanity, addiction, and unapologetic depravity. I like Jane tremendously, and was very glad to finally have more of her history, which was only glanced over before. Told in a succession of one-sided correspondence between Jane and a recently married former companion from Miss Gither’s Finishing School (which must have been quite an institution!), Squamous illustrates the rapid progression of Jane’s curse from its inception. I thought this was the funniest of the offerings, and cackled repeatedly over Jane’s sharp wit and ready use of proper speech for the discussion of some very improper notions.

Next, we are treated to bonus content in the form of journal entries from Mrs. Miranda Lovelace, the first aethermancer. These abbreviated entries are scientifically fascinating and highlight Mr. Hall’s knowledge of all manner of subjects, as well as his imaginative use of it in his writing. The journal itself is a lens on a great catalyst, setting many things in motion and underscoring why the inevitable marriage of science and politics should be regarded with wariness, if not absolute terror. It is also the story of the birth of Liberty.

While all of these tales are presented in unique and clever ways, none struck me as more pure, heartfelt, and wondrous as Cloudy Climes and Starless Skies. This is my absolute favorite of the collection, and I was completely enchanted and thoroughly won over yet again by Byron Kae. Perfectly balanced between past and present with the inclusion of commentary from Piccadilly, Cloudy Climes begins as sweetly as anything I have ever read and is an expansive recounting of Byron Kae’s life up to the point of its telling. I really can’t do this selection proper justice by adding anything else, except to say that I think they are one of the best characters I’ve ever read. And Piccadilly, too.

The final story in the collection brings everyone, with the exception of Ruben and Milord, together for a battle of survival on the previously mentioned skytown called Liberty. It is the culmination of an intricate tangle of happenings and details and is potentially dizzying in scope, although it really isn’t. Told in flashbacks, declassified court documents, and testimony current to the story, it should be read in order to fully appreciate all the action and intrigue to its true potential. While there is certainly a degree of caution present in Liberty, a delightfully substantial amount of testimony was removed for reasons of “modesty” or “decency” of the court, giving plenty of well-timed levity to the proceedings.

Liberty and Other Stories has something for just about everyone: suspense, a little horror, adventure, humor, and romance. It is filled with tales of loss, hope, and, best of all, love, and all the frustratingly beautiful chaos that goes along with it. Even without the other stories, I found the unvarnished intimacy in Cloudy Climes and Starless Skies to be downright breathtaking. All of the Prosperity covers are gorgeous, as well, and the artwork for the individual stories in Liberty and Other Stories should definitely not be missed. Left with a review copy now colored in a patchwork of virtual highlights and notations, I am happily adding the Prosperity series to my list of all-time favorites, and I recommend it most highly. I hope everyone else enjoys it just as much.

For the delight and edification of discerning readers, we present diverse stories concerning the lives, histories, and adventures of the crew of the aethership Shadowless.

Lament! as an upstanding clergyman falls into the villainous clutches of a notorious criminal mastermind.

Question your sanity! as a dissolute governess confronts blasphemies from beyond creation.

Wonder! at the journey of the dashing skycaptain Byron Kae across sapphire oceans, through smog-choked streets, and to the depths of the sky itself.

Gasp! at an entirely true and accurately rendered tale of pirates, cavalrymen, aethermancers, scientists, and a power to unmake the world.

Plus, hitherto unseen extracts from the meticulous and illuminating journals of Mrs. Miranda Lovelace, rogue scientist and first of the aethermancers.

Reviews in the Series:
Prosperity by Alexis Hall (Prosperity #1)

There Will be Phlogiston 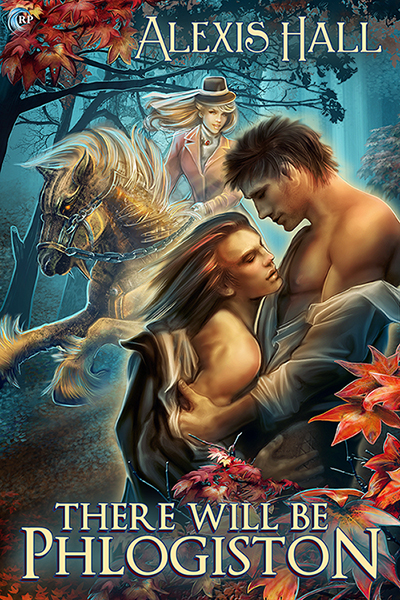 Want more in the Prosperity universe? Get There Will be Phlogiston (Prosperity #5) for FREE, read on for details.

An instructive story in which vice receives its just reward.

Inspired by true and scandalous tales of the Gaslight aristocracy, we present the most moral and improving tale of Lady Rosamond Wolfram.

Weep, reader, for the plight of our heroine as she descends into piteous ruin in the clutches of the notorious Phlogiston Baron, Anstruther Jones. Witness the horrors of feminine rebellion when this headstrong young lady defies her father, breaks an advantageous engagement, and slips into depravity with a social inferior. Before the last page is turned, you will have seen our heroine molested by carnival folk, snubbed at a dance, and drawn into a sinful ménage a trois by an unrepentant sodomite, the wicked and licentious Lord Mercury.

Reader, take heed. No aspect of our unfortunate heroine’s life, adventures, or conduct is at all admirable, desirable, exciting, thrilling, glamorous, or filled with heady passion and gay romance.

Get this free read now: http://riptidepublishing.com/titles/there-will-be-phlogiston

Thanks for following the tour! You can win an ebook copy of a novel of your choice from Alexis Hall’s catalog, and a $10 Riptide gift certificate!

All you have to do is leave a comment on this post. Please put your email in the body of the comment, not just in email section of the comment form. Be sure to follow the whole tour, because the more comments you leave, the more chances you have to win the prize!

The giveaway is open during the blog tour. Winner(s) chosen at random from all eligible entries. This contest is open internationally where not prohibited by law. Open to participants, 18 years or older, who are legally allowed to participate in such a contest as allowed by their local laws. All federal, state, local, and municipal laws and regulations apply. Void where prohibited. No purchase necessary. By participating in the contest, participants agree to be bound by the decisions of the contest sponsor. Prize will be delivered by the author and/or publisher. This blog, its reviewers, and the owner are not responsible for items lost in the mail. By entering this giveaway, participants agree to abide by these terms.

18 responses to “Review + Giveaway: Liberty and Other Stories by Alexis Hall”