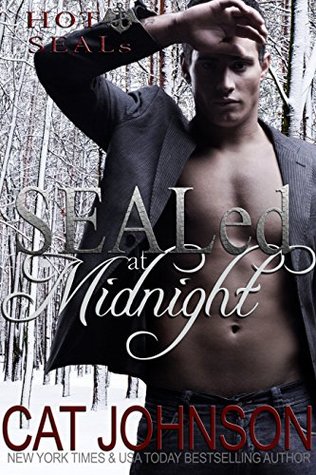 Thom Grande, age 28 and divorced father of two, feels broken and alone. His ex really messed him up, and he’s not been with a woman in 18 months. To top that off, all of his buddies are getting out of the military, leaving Brody as his only friend left on his SEAL team. Then, on a dangerous mission Thom is injured and suffers temporary memory loss.

Virginia Starr has had no luck in the dating department. Alone and introverted, she takes a house-sitting job for the winter, moving away from family at Christmas time. One night, Ginny finds a stranger, frozen and clearly distraught, hiding in the barn. Bringing him inside to warm him up, the pair find themselves inexplicably drawn to one another.

I have mixed feelings about SEALed at Midnight. After loving the first two books in the series, I had high hopes for this one. And while the story moved quickly and the romancing was sexy, I had some issues with the plot.

First, I was a bit disturbed at how Virginia and Thom meet… he clearly has psychiatric issues, and Ginny not only just lets him into the house that she doesn’t own, but cuddles up to him. I don’t care how frostbitten the boy was or how cute he may be, this just doesn’t sit well with me.

Second, the pair spends very little time together, yet by the end of the book, they are ready to try a long distance relationship. I felt it was too soon, in that the author hadn’t truly established a strong connection between the pair. I needed a few more scenes with Ginny and Thom together, talking, smexing, whatever, but something more.

Overall, SEALed at Midnight is a steamy story, but left me unsatisfied. This story is full of promise and easily could have been a B+ or better, but while I enjoyed reading the novella, the story felt cut short and left me hanging. I don’t know if I would even classify the book as an HFN (happily for now), due to the fact that the couple didn’t even meet until after 50% mark and shared only a handful of scenes together. I’m hoping that Ms. Johnson takes the time to finish Thom and Ginny’s story in a future title.

As a combat hardened Navy SEAL Thom Grande has fought terrorism around the globe, but the one thing he can’t fight is his ex-wife. Or her lawyer. Or the alimony payments. Just when he thinks it can’t get any worse bad luck smacks him up side the head—literally. Now, he’s got a traumatic brain injury and can’t remember his own name half the time. The good news? He can’t remember his ex-wife or the woes she’s causing him either.

Virginia is alone, partially by choice because too much time spent around her mother drives her crazy, and partially because she has the worst luck ever with romance. But maybe her luck is changing because one hell of a hot and very naked man just showed up at her door. One problem—he can’t remember anything, including who he is. The more she sees, the more she realizes, that might not matter all that much.

4 responses to “Review: SEALed at Midnight by Cat Johnson”