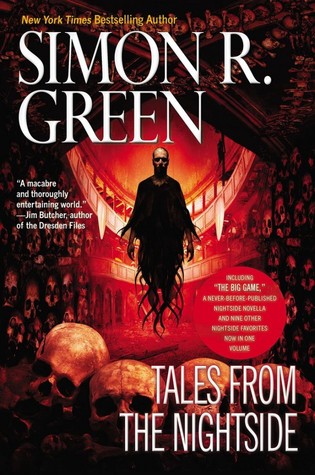 Una and Gikany are fans of Simon Green’s work. We enjoy both the Secret History and Ghostfinders series.  We discovered him after his completion of the Nightside series.  Gikany picked up the series and read them all because she was intrigued by the reference to them in the Secret History series.  Una has them on her TBR list but hasn’t been able to start them yet.  Therefore we can offer a pretty good overall review of this bonus anthology.

Gikany thoroughly enjoyed Tales from the Nightside.  It not only gave background to some of the side characters, but also resolved some mysteries in the overall series.  She enjoyed having the holes filled in.  Through this collection of short stories, Green answered some of those questions while also telling stories about minor characters that made only cameos in the occasional Nightside novel.

Una enjoyed the stories as well.  However, she could tell that she was missing information.  Though they work well as standalone stories, she felt she was truly missing the depth of revelations that some of the stories gave.  In fact, she was confused on a couple characters, wondering if they were the same person or not (they weren’t).  She also had a few, “what?!?” moments as her lack of familiarity with the series prevented her from understanding why certain characters were the way they were.  The relationships between some of the characters were lost on her, as was the importance of others.  Luckily for Una, she’ll soon forget all that she learned through these tales and will blissfully start on the series so she can return to this anthology at a later date and truly enjoy it for what it is.

Tales from the Nightside whetted Una’s appetite for reading the series while giving Gikany the cherry on top for finishing it.  If you haven’t ventured into the Nightside, you really should.  Make sure to read the series from the beginning otherwise you may miss out on a well-crafted series.

Welcome to the Nightside. It’s the secret heart of London, beating to its own rhythm, pumping lifeblood through the veins of its streets and alleys hidden in eternal darkness, where creatures of the night congregate and where the sun is afraid to shine. It’s the place to go if you’re looking to indulge the darker side of your nature—and to hell with the consequences.

Tales from the Nightside presents ten macabre mysteries that shine a dim beam into the neighborhood’s darkest corners to reveal things that should never come to light. Take a walk with such deadly and dangerous denizens of the Nightside as Razor Eddie, Dead Boy, and Larry Oblivion as they encounter things even more inhuman and inhumane than they are. And join John Taylor, the PI with a knack for finding lost things, as he confronts Sir Francis Varney, King of the Vampires, in a never-before-published novella-length adventure.

Purchase Info:
Tales from the Nightside (A Nightside Book)

4 responses to “Review: Tales from the Nightside by Simon R. Green”