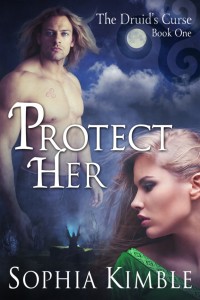 The side door to the house opened behind her.

The deep male voice filled the kitchen. Filled her. Her muscles tightened, her arms vibrated like she’d been doing yard work for the last hour and had just turned off the weed whacker.

Mary raised an eyebrow in her direction before looking past her to the door. “Kris, proszę meet Golden. Come, come.”

Heavy boots sounded on the wooden steps. The loud thumping stopped as if in mid-step and an invisible electric current slammed into her back. Heat spread through her and settled in her belly.

“Golden is your Babci’s new caregiver.” Mary enunciated as if she were speaking to a five-year-old. “I told you last week she answered the ad and was coming today. She’ll be starting on Monday.”

Mary glared at Kris and then turned to Golden with an apologetic smile on her face. Kris moved around the table and stood next to his mother.

He narrowed his piercing blue eyes at her, and a lock of sandy brown hair fell from behind his ear.

He looked exactly like the man she’d been dreaming of for years.

The once cozy kitchen felt tiny. Airless. Too hot. Using the table as a lever, Golden forced herself to stand and shot a glance in Mary’s direction, worried she was hallucinating her dream man and looked delusional. It wouldn’t be the first time she’d acted crazy. Okay, Mary didn’t act like her new employee was tripping her ass off. Good to know.

Words in a language she didn’t understand flew out of his mouth, his unfriendly gaze fixed on her. Wow, angry much? He was obviously talking about her in a not so nice way, which pissed her off. Combined with her confusion, she was a hot mess. And all the while her emotions were ping ponging, her body pulsed, begging for this jerkoff to touch her.

His brows furrowed, and he ranted as though she weren’t in the room. Rude. New plan. She’d figure out how she’d dreamt of him later. First, she wanted to know what he had against her and why she reacted to the jerk like he’d brought her a dozen roses while hanging out the sunroof of a limo.

Mary cut him off with a single word. “Dosyć!” She closed her eyes and whispered, “Enough.”

Kris sucked in a breath, and without another word, pivoted on his heel and walked deeper into the house.

What was wrong with him? Ever hear of anger management classes? And what was wrong with her Benedict Arnold body? Pick an emotion and stick to it. Anger, that’s what was called for here. Not, gee you’re hot, I’ve been dreaming of you for years. Want to hook up?

Figures, the one guy that finally made her wake up and say hell yes was a total turd.

3 responses to “Sunday Snippet: Protect Her by Sophia Kimble”