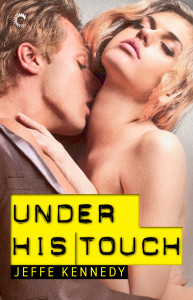 In the end, she dithered too long if she was going to catch the train in time to get there by seven. So she went with what she wanted to wear—a white halter-top sundress and flat sandals—pulled her hair up into a ponytail high on the crown of her head, and dashed out the door with only minutes to spare.

Then, of course, being a Saturday, the trains ran differently and the weekend desk guard didn’t know her, taking forever to check her ID. She blew in ten minutes late, flustered, and was greeted by the ever-unflappable Alec, who raised an eyebrow at her hasty entrance.

“Sorry I’m late!” To make up for it, she plopped herself into her chair, pulled the laptop out of her carry bag and booted it up, pretending not to see the Starbucks bag and venti cup sitting nearby. Restraining herself from offering a flurry of excuses and further apologies.

“Indeed,” he said in that coolly polite tone. “I’m most disappointed in you, Ms. Dolors.”

Well shit. Perversely, guilt made her feel defensive. “You know, you can call me Amber.”

“I don’t think that’s a good idea.” His pen scratched on the paper in the ensuing silence. Not in a suit, but still far from casually dressed, he wore pressed trousers and a soft violet dress shirt, open at the collar. “Have your breakfast, lest it get cold. I forgot to ask what you wanted, but I think I got your usual correct.”

Picking up the cup, she deciphered the barista’s shorthand. Nonfat peppermint mocha twist. And an egg white wrap in the bag. Bemused she took it out, casting him a long look. How had it happened that Alexander Knight noticed what she typically grabbed from Starbucks?

When he barely grunted in reply, she had to keep going. “It says Alex on the cup.”

“Yes. You Americans think it should be Alex and not Alec, as is proper.”

“Alexander is spelled with an x, not a c,” she pointed out.

He raised his head, dark eyes sweeping her from head to foot, simmering with something that wasn’t impatience, though he tried to make it look that way. “Do you intend to while away the morning discussing nicknames on both sides of the pond?”

She grinned at him, just to watch his eyes narrow. “No, sir.”

“Then get to work, lest I be forced to add laggardly habits to your list of transgressions.”

Watching him over the rim of her cup, feeling a bit giddy, both from the sexual tension coming off of him and the sugar and caffeine hitting her bloodstream, she decided not to say anything about the items on this supposed list—and what the punishments might be for them. Instead, she said, “Can I call you Alec?”

“You let some random Starbucks barista call you Alex but not your faithful assistant who gave up her weekend to be your work slave and who found something really interesting when she worked even later last night?”

“You’re not going to bait me. The next words out of your mouth had better be something of interest in Curlew’s records.”

“How about that I think I found the data from the missing months?”

That got his attention. He focused that sharp dark gaze on her, nostrils flaring as if he caught the scent of something. “Misfiled, were they?”

“Mislabeled for sure. You should see.”

He hesitated, infinitesimally, then rose and came down the table, peering at the screen and what she pointed out. Walking him through the way the files appeared to have been deliberately buried, her skin prickled with his proximity. And with the certainty that his gaze had brushed over the rise of her breasts from the neckline of the sundress. The exposed back of her neck warmed. The scent of coffee on his breath and his spicy aftershave combined to give her the sense that they were sharing an intimate morning together, perhaps after a long night of sex.

“Well done,” he murmured. And touched her bare shoulder.

Barely a brush of his fingertips, a pat of approval, thoughtlessly done perhaps, but it jolted through her as if she’d put her finger in an electric socket. Her nipples hardened in a flash and she went instantly wet. Impossible that such chaste contact could turn her inside out so fast and yet…she pressed her lips together against a soft moan of longing.

Catching his breath, he stopped, hand motionless on her arm, a long, still moment. Then he dragged his fingers up again, stroking against her skin, an excruciatingly slow caress full of sensuality, rounding the curve of her shoulder.

Pausing at the strap of her halter.

Then moving up to feather over her throat. Down to trace her collarbone.

She stayed perfectly still, as if any movement on her part might scare him off. Send him back into his remote formality. He cleared his throat and she heard him swallow.

“Forgive me,” he said, voice rough. But he didn’t take his hand away, instead, his fingers flexed, dimpling her flesh.

Letting the quiet moan out, she tipped her head back, meeting his intense gaze. So close. Close enough to kiss her and then finish the caress, to slide those long fingers inside to cup her breast and thumb her nipple. To squeeze harder. Vising on her, like his hand on her shoulder.

The one he snatched away then, as if she’d burned him.

“Forgive me,” he repeated and took a firm step back. “I apologize for that transgression. Unforgivable, actually.”

She swiveled in the chair to face him, tempted to simply rip open that so-correct shirt and run her hands over him until he stopped talking. Instead she smiled. “I liked it. I like you. Alec.”

His hand still tingled from the velvet softness of her skin, from the way she’d heated under his touch and the fine tremor that had run through her. Even now her nipples made hard points against the white cotton of her damnably innocent-looking sundress, the creamy curves of her breasts only shades darker rising above the clasp of the fabric. She held his gaze, wide blue eyes full of sensual knowledge. He had no doubt that, if he pushed her full skirts up those long, limber thighs, thrust his hand between them, she’d be hot and wet for him. And she’d drop her head back again as she just had, exposing the swanlike line of her throat and making that throaty moan of approving desire.

“We can’t do this,” he managed. “I can’t do this.” He said it to remind himself. Firmly. Then thrust his hands in his trouser pockets, needing desperately to relieve the pressure on his raging hard-on.

Her eyes dropped there, pretty mouth curving before she tilted her head. “Looks like you can.” She had a teasing note in her voice, an invitation, but also uncertainty. Not as confident as she’d hope to be then.

“I’m your boss, Amber.” He said it gently, so she’d know he wasn’t rejecting her. Far from it. He seemed to be totally unable to resist her. To his great shame and detriment.

“I’m an adult. Consenting. We’re both unattached. Both interested.” She probably hadn’t meant that last to be a question, but it came out that way.

With a long breath he sat on one of the chairs ringing the room and scrubbed his hands over his face. He’d barely slept, thinking of her and her graceful gestures, her melodious voice and teasing laugh. She’d cajoled him into eating a cannoli, apparently unaware of how she looked, wrapping her lips around the pastry, then rolling her eyes in ecstatic delight at the flavor, delicately licking crumbs from her fingertips and dabbing at the corners of her mouth. The image had stuck with him all night and, when she’d rushed into the room, cheeks flushed from hurrying and full skirt flying around her dimpled knees, it had taken all his self-control not to pull her into his arms for a long, heated kiss.

Which was why he’d had none left to stop himself from breathing in the sweetness of her skin, from running his hand along the seductive texture of it, to extend that moment of devastating contact.

“It doesn’t work that way,” he finally told her, when he had a modicum of ability to think again.

She tilted her head, crossing her legs, so her dress revealed a glimpse of the underside of her thigh. “We’re not both consenting and interested?”

“No. I mean, yes. That is.” He sat straight, instructed himself to handle this better. “Those things don’t matter. I hold power over your job, arguably your future career. I can’t be interested in you. It would be unfair to you, to my partners, to the company as a whole. Most of all it would be unfair to you.” With that he stood, thankfully able to breathe again, and went back to the other end of the table. “We won’t speak of this again.”

4 responses to “Sunday Snippet: Under His Touch by Jeffe Kennedy”