After picking up and blazing through the Mercy Thompson series by Patricia Briggs on audiobook, someone encouraged me to listen to the spinoff series, Alpha & Omega. I was more than a little frustrated with the Mercy series (possibly another Listen Up! post), and I was told by a number of people that they, in fact, enjoy Alpha & Omega more than Mercy. After finishing the first two stories, I can whole heartedly agree! Overall, the Alpha & Omega series has a balanced feel, sharing equal time between romance and action, as well as male and female characters. Whereas Mercy is told from the first person point-of-view of the heroine, the Alpha & Omega stories have multiple points-of-view, adding to that sense of balance.

Today I’m sharing my reviews of the prequel novella and first book, and be sure to come back next week for my reviews of books 2 and 3. Note: This series can be read independently from the Mercy Thompson series, but the two series are somewhat intertwined. For more information on chronological reading order, please visit Hurog forum website. Due to the building nature of the series, each review may contain spoilers from previous books. 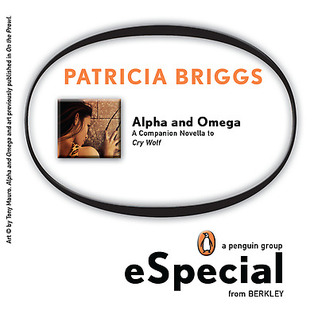 The series opens with this novella, sharing the story of how Charles and Anna meet. For those unfamiliar with the Mercy Thompson world, Charles is her adoptive brother of sorts – the son of Bran, head of all werewolves, the man that helped raise Mercy. This story takes place during the same time as the first Mercy book, Moon Called.Anna is an emotionally and physically abused female werewolf, who didn’t ask to be turned (a big no-no in this world). She knows little about her own kind except darkness and cruelty. When she realizes something isn’t quite right with her pack, she contacts Bran and shares her concerns.

Charles is Bran’s second and executioner. He arrives in Chicago to discover what is wrong with the local pack, but finds himself inexplicably drawn to the timid female wolf, Anna.

Anna and Charles are special right from the start. There is a huge gap in their experiences, ages, and knowledge, yet the pair click immediately – even through Anna’s fear. What I love is that instead of this being explained away by “true mating” or “insta-love,” the author gives logical explanations based on who each wolf is in relationship to the other and the larger werewolf society. I also enjoyed the back-and-forth changing POV’s from Anna and Charles, giving great insight from two perspectives.

The story is quick, but satisfying for me, especially having learned about the events in Chicago peripherally via the Mercy series. However, the novella is completely stand alone and works as a great introduction to the Alpha and Omega series.

Overall, the narration by Holter Graham is good. I enjoy his soothing “narrator” voice, and find his female voices well-done. However, I did not care as much for the voice of Charles. The voice came across sounding like a “big brut” and someone slow, rather than the intelligent, sharp Native American that I find Charles to be. While it didn’t bother me enough to disrupt my enjoyment of the story, I still didn’t care for it that much. 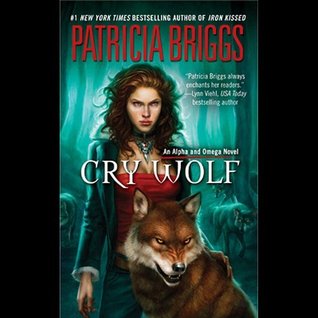 After feeling frustrated with the Mercy Thompson series, I feel like I’ve found a real treasure in the Alpha and Omega series. Cry Wolf is the first full-length story in the series, following the must-read prequel novella that shares how the primary characters, Anna and Charles, meet.Firmly straddling the line between urban fantasy and paranormal romance, Cry Wolf continues the story of how Anna and Charles become mated. Although Anna has been a werewolf for three years, she was kept in the dark as to her true Omega nature and all that it means to be a were. Anna’s wolf has fully accepted that Charles’s wolf is her mate; however, Anna’s human half continues to be haunted by the atrocities she endured for three years under her former alpha and pack. This, coupled with Charles’s lack of experience in mating and in dealing with an Omega, makes mating a difficult proposition. I throughly enjoy how Ms. Briggs uses the wolf, especially in Anna, to deal with the horrors, keeping the human safe and mentally intact. It’s an interesting and effective tool that allows the characters to progress forward without minimizing their horrific pasts.

In addition to the story of their mating, Anna and Charles must help Bran, Charles’s father and the alpha of all North America werewolves, find a rogue were who has attacked innocent humans near to their home in Aspen Creek, Montana. Heading out into the wilderness together gives the pair some much needed alone time to talk about all that has happened. It also affords Anna the chance to ask questions, giving the reader insight to Ms. Briggs’s mythology. The riddle of the rogue and all that comes with it, is an exciting and fascinating story on its own.

Being shared through multiple character point-of-views is one of the best things about Cry Wolf. It not only gives the listener/reader a greater understanding of the overall story, but it provides a balance that one doesn’t always find in UF series. I found myself completely engaged with each character even when the story wasn’t being shared from his/her POV.

I also want to mention how much I enjoyed the characters of Asil-the Moor and Bran, two wolves I met during the course of reading the Mercy Thompson books. Learning more about both characters’ long history brought a lot to the entire Mercy/A-O universe.

I enjoyed the narration by Holter Graham much more this time around. Whether it is that his performance has improved between the novella and this book or if it is my perception, I found myself enjoying each of his character voices, even Charles, with whom I did not care for in the prequel. I find his cadence soothing and easy to enjoy.