Audiobook review: The Will by Kristen Ashley 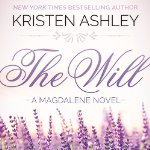 My biggest complaint about contemporary romance is the couple falls into bed too quickly. Maybe it is because I’m not a fast mover and shaker. I’m shy when it comes to intimacy and can’t see myself plunging into a one-night stand situation or allowing myself to be vulnerable with someone I’ve barely met. I want the slowly burning romance, the flirting, the butterflies in the stomach, and the anxious anticipation. I want the real stuff and I want to see them get to know each other and build some trust and foundation first. Don’t skip to the end, and give me the warmup! The Will has that and more.

The majority of the story is from Josie’s point of view. I have to give some major credit to Ms. Ashley. I didn’t like Josie at first. In fact I really disliked her. I found her superficial, self-absorbed and haughty. I have nothing in common with a fashionista. But through the course of the novel, I was able to get to know Josie. As she delves into her own issues, we learn that Josie is a fiercely loyal and loving person who had been severely scarred. Though she appears perfect, she is actually broken and a bit awkward. As her walls and barriers fall, her disguise was dismantled, and the beautiful soul within her was revealed. What was wonderful was the realization that the people in Josie’s life knew that but allowed her the space and the security she craved. They took what she allowed them to have and cherished that.

There are few precious chapters that are from Jake’s point-of-view. I treasured these. Jake is a seriously fabulous and perfect guy. It isn’t until the end that you find out how absolutely awesome he is. However, Jake earned that. He made mistakes in his past but has learned from them. Considering the scars that Josie bears, he really took his time with her and was careful with her, but still challenged and encouraged her. I read a review that said Josie was too perfect, but for me, I thought Jake was almost too perfect. But he isn’t and it humanized him greatly. He is perfect because he is perfect for Josie. They find their way together and he is willing to do the work to earn her… forever and keep her.

As the story wove its way, I kept thinking I knew what would happen next. It never went the way I was expecting; maybe because a secret ops team dropping out of nowhere to kidnap Josie or a vixen able to lure Jake away doesn’t fit the genre (does this show how much urban fantasy and paranormal romance I read???). What I really loved about the obstacles that popped up was that they were not that extreme. They felt extreme and frightening because in the moment, they are, as they would be for anyone. But Jake and Josie, once the shock of it wore off, think. They think about it and then decide how to act. Then they do what needs to be done. I really admired them, admired their growth and their communication. The emotions that are expressed in the novel really reached deep into me. This was truly a well-written journey of two people not just finding each other, but themselves.

Now to the narration, Ms. McCarthy nailed it. Her voice was completely spot on for Josie. I also liked how she was able to drop her voice for the male’s dialogue and Jake’s narration. Though there wasn’t much differentiation between the male voices, there was enough. She also applied hesitations and emotions to the dialogue, really bringing the novel to life. It was just pure auditory bliss! Because of the nature and personality of Josie, I found listening to it at 1x was just perfect – it suited her, unhurried and refined. I started it at 1.25x and it felt rushed and at the beginning, Josie is efficient but not rushed.

The Will was an opportunity that I took in order to change my bias towards contemporary romance. I could not have picked a better novel to show me that there is phenomenal contemporary romance that won’t make me grind my teeth in disbelief. I loved the story of Josie and Jake. It was filled with romance, passion, self-discovery and friendship. The author gave the characters the time they needed to actually build a relationship that I thoroughly loved. The narration only added to my enjoyment, truly making the story come to life. I eagerly await the next title in this series.

6 responses to “Listen Up! Audiobook Review: The Will by Kristen Ashley”