One thing I love about audiobooks, is the opportunity to finally “read” some of those books that have been on my TRB list for a while now. One such series is The Night Huntress series by Jeaniene Frost. I’ve heard so many wonderful things about Cat and Bones, I’m glad to finally begin their journey.

Halfway to the Grave, Book 1 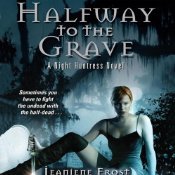 Halfway to the Grave introduces readers to Cat Crawfield, a half-vampire, half-human anomaly. She was raised to believe that all vampires are evil, and once she turned sixteen, began to hunt and kill these secret creatures. Cat never had a problem in the past six years until one night when she comes across a dangerous, handsome vampire who kidnaps her. Once Bones discovers what Cat is, he forms an alliance to train her in exchange for her help in stopping the vampires of his choosing.

Overall I really enjoyed my introduction to Cat and Bones. The pair have an immediate and intense chemistry that makes it easy to enjoy their romance. While I felt Bone’s proclamation of love was a bit early, by the end of the book, I was firmly sold on their mutual affections. I enjoyed seeing Cat’s transformation from a young fighter filled with blind hate to a solid woman who can make the difficult decisions. Cat’s mom is an easy-to-dislike pain, and I wonder how her prejudices and fears will play out in the series.

The story itself sort of jumps all over the place and was a little slow at the start. However, once things got moving, I found I couldn’t turn off the audiobook. There is just something about the mix of action, mythology, and romance that drew me in completely and hunger for more. The ending does leave readers a bit off balance, but lucky for me, I was able to jump into the second title immediately!

The series is narrated by Tavia Gilbert. I had heard from a number of folks before I started the series that they had trouble with her performance, most especially with Bones. However, not having ever read the series prior to listening to Halfway to the Grave, I had relatively few issues with it. I can see why her cockney-accented Bones may annoy some – it’s not uber-sexy, but it suits his history and long life. It may be a bit high-toned, but it grew on me, especially when Bones would whisper his affections to Cat. Meanwhile, I adored Cat’s voice, which was strong and determined, while simultaneously young. Overall, I feel that Ms. Gilbert does a wonderful job capturing the non-speaking vocals such as sighs, whispers, gasps, and yawns, working them in seamlessly and naturally.

One Foot in the Grave, Book 2 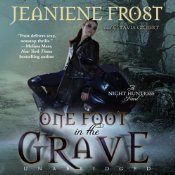 After having been left a bit off balance at the end of Halfway to the Grave when Cat leaves Bones to work for the FBI, I was anxious to start One Foot in the Grave. But was I in shock when the story opens four years after the conclusion of the first book!! Wow! The first half of the book focuses on Cat’s new life working undercover as a vampire killer, along with filling us in on her new friends and teammates. While I found this interesting and solid reading, I didn’t care for the fact that there was no clear storyline for me to latch on to.

Even after Bones finally returns into the picture, I still wasn’t certain where the story was headed. The book really read more like a paranormal romance, with the primary focus being on Cat and Bones’s relationship. I didn’t mind it, but would have preferred a stronger urban fantasy storyline.

The second part of the book centers on protecting Cat from both an unknown assailant, as well as Bones’s sire, Ian. The book itself was highly addictive, but when I was done, I felt that there were flaws and holes. One thing that really bothered me was the need for an extensively elaborate and dangerous deception with respect to Ian. I often wondered why Bones didn’t just tell his sire the truth. In fact, my pondering escalated to the point of distraction.

There are some excellent twists revealed in One Foot in the Grave, game changers that I honestly did not see coming. These twists add much to the overall mythology and storyline, and I like the end results. I also enjoy seeing Cat and Bones together and rebuilding their relationship, although Cat’s jealousy did grind on me after a while.

The narration by Tavia Gilbert has grown on me, and I found that I really enjoyed her performances of both Cat and Bones. I decided I like his cockney accent, especially when he gets all lustful with Cat. The one voice that truly annoyed me is that of Cat’s mother. However, Justina is an annoying character, so I guess it fits.

Overall, I’m still addicted to Cat and Bones and look forward to listening to the next title. While One Foot in the Grave wasn’t perfect, it was exciting and worth the listen. 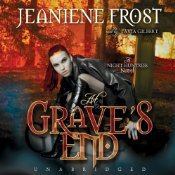 The third installment of the Night Huntress series had both some great highlights and some less than spectacular moments. Overall, I liked the action and there were some tender and heart-felt scenes; however, once again, I felt that there were some basic facts left out of the story, leaving me to wonder why such a big fuss was made in getting to the end results.

One thing I appreciated this time around was that At Grave’s End fell more firmly in the urban fantasy genre with a side of romance, rather than the relationship being the primary focus. An overall plot line was introduced at the start of the story and was carried throughout the entire book, which is something that is lacking in the previous two tales. While I felt that the reasons behind the war with crazed vampire Petra were unclear, the resulting actions were exciting. But it did bother me that a huge war was waged when I wasn’t certain why.

Cat and Bones were lovely together, mostly, and there were some very touching moments. But one of the biggest issues I had with the book was Cat’s friend Tate and his unending, relentless pursuit of Cat. It. Made. Me. Angry. I don’t understand why Cat continues to allow Tate to blatantly harass Bones with his forthright, aggressive desire for Cat. I honestly wanted to stab Tate and/or Cat for letting it go on so long. Luckily Cat does have a moment of clarity when she puts Tate in his place, but it was short lived.

There is an utterly gruesome torture scene near the start of the book, and I did have to take a short break from listening. I didn’t lower my rating of the book due to the scene, however, because it sets in motion a number of events critical for the forward progress of the series, to include finally bringing Cat and her mom closer together.

The narration by Tavia Gilbert continues to be above par, and I enjoy her interpretation of both Cat and Bones. Ms. Gilbert also excels at the non-speaking verbals such as yawns and sighs, as well as nailing intense emotional outbursts.

14 responses to “Listen Up! The Night Huntress series”