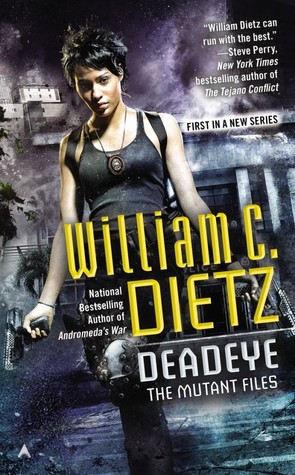 I love finding new and interesting mythologies.  Deadeye is the start of what could be a really awesome series.  This futuristic post-apocalyptic detective drama was gripping and intriguing.

First off, the world is really interesting.  It’s our world after a terrorist has unleashed a deadly bioweapon.  This infectious bacterium has decimated populations.  There are three groups of survivors: carriers, mutants, and “norms”.  There is some overlap between the first two groups as some of the mutants are also carriers.  In order to protect the norms, the infected were placed into camps.  There are now “norm-run” states and there are the mutant run areas.  The borders are militantly guarded to try to prevent the bacteria from infecting the norm states.  The ramifications from the decimation of populations and the loss of certain areas to mutants were interesting to see.  Though technology seems the same, certain industries suffered greatly.  New cars are uncommon, but there are still cell phones and computers.  It was an interesting mix of what survives and thrives versus what did not.

The mix of characters was just as intriguing.  I liked our heroine, Cassandra Lee, nicknamed Deadeye.  She is fierce and loyal but mostly stubborn and determined.  I admired her grit.  Her emotions are bottled up, but she deeply cares about people and justice.  You see that drive as she works as a detective for the norm-state of Pacifica.  I found Omo to be truly fascinating as well.  As a mutant and a deputy from the Republic of Texas (a mutant run area), he added an interesting contrast to Lee and a source of knowledge.  His cowboy-esque style was endearing.  There are several other characters we meet that help to add to the richness of the world – good and bad.

The only drawback with the novel was the multiple points of view.  The majority of the story is told from the points of view of Lee and Omo.  However, there may have been as many as ten other points of view (I lost count after eight).  That is a lot of different heads to be in, and it takes time to transition from one character to another.  I felt it interrupted the flow of the novel having so many points of view.  Some of them were very short snippets and were not really necessary in the overall scheme of things.  Unless the characters return in future novels, I’m not sure the information they provided was necessary.  It did help to give a more global perspective of the world, but as for the plot development and flow of the novel, they were distracting.

From my perusal of the author’s site, it appears that this is to be a trilogy.  I’m completely intrigued as I suspect that the Bonebreaker is the overarching story line for the trilogy.  The Bonebreaker is a serial killer that Lee has a vendetta against.  He murdered her father.  But it seems that the Bonebreaker may have his eyes on Lee as a next victim.  However, that intriguing plot is loosely threaded along the major plot of Deadeye.  That being the kidnapped daughter plot arch which was gripping.  I really enjoyed it and the adventure that Lee undertakes to retrieve her.  There were plenty of twists and turns and I enjoyed the ride.  I hope to see more of Omo in the future books, as I really enjoyed him and the contrast he brought to Lee.

Deadeye is a promising start to a gripping and fascinating new science fiction detective drama.  Though I didn’t like the numerous points of view, I enjoyed the characters, the world and the nail-biting journey.  If you enjoy post-apocalyptic worlds, gripping action and suspenseful detective drama, the Mutant Files series is for you.

In the year 2038, an act of bioengineered terrorism decimated humanity. Those who survived were either completely unaffected or developed horrible mutations. Across the globe, nations are now divided between areas populated by “norms” and lands run by “mutants”…

Detective Cassandra Lee of Los Angeles’s Special Investigative Section has built a fierce reputation taking down some of the city’s most notorious criminals. But the serial cop killer known as Bonebreaker—who murdered Lee’s father—is still at large. Officially, she’s too personally involved to work on the Bonebreaker case. Unofficially, she’s going to hunt him to the ends of the earth.

In the meantime, duty calls when the daughter of Bishop Screed, head of the Church of Human Purity, is kidnapped by mutants and taken into the red zone to be used for breeding. Assigned to rescue her, Lee must trust her new partner—mutant lawman Deputy Ras Omo—to guide her not only through the unfamiliar territory but through the prejudicial divisions between mutants and norms…