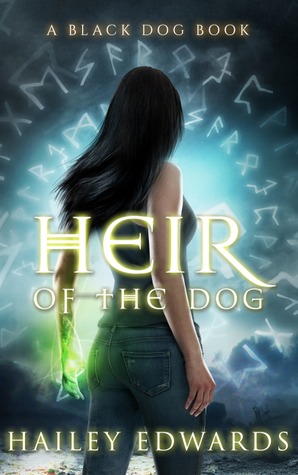 I don’t know what it is about these Black Dog books. I Eat. Them. Up. With engaging writing, an awesome heroine, and a hint of love story, I’m enthralled each time I open up one of them. I never know which way the story will turn out until the end. Mmmhm. A smidge of suspense and unpredictable story telling. Gotta love it.

When I started reading, I thought things were kicking up a notch with Shaw. Um. Not. Thierry finds herself tangled in the politics of Faerie. There’s a new guy on the scene, too. *boggle*

New Dude is pretty amazing (yeah. I’m being vague). What I liked the most about him was the way he had an end-game. The whole plot drove toward his purpose. Besides being focused on the future, I liked New Dude because he protected Thierry. Even though things were a bit crazy at the end, New Dude kept things on an even keel.

We learned more of Thierry’s dad, too. Which was pretty cool. He is a major player in the politics of Faerie. Unfortunately, he’s MIA and Thierry needs to step in to take his place. What stinks about Thierry having to step in to fill his shoes is that she’s only part fae. With the Hunt to determine the new king of the fae, Thierry is in peril…instead of her dad. My jaw dropped. I had to see how these things turned out, and whether Thierry’s dad showed up.

Thierry is still an awesome heroine, though. She stands on her own, and looks out for her mom. She doesn’t need to be taken care of by anyone—not Shaw, not New Dude. Even in extreme danger, Thierry is able to manage and keep a cool head. She even kicks butt throughout the story, stands for her beliefs, and manages to maintain her calm, cool exterior in the face of danger. Seriously, I would have been a weeping mess.

The Black Dog series is an awesome read. I love sitting down with one of these titles on a lazy afternoon. They provide me with a great way to hop back into fantasy stories, and I adore the characters. I can’t wait to see what the next two books in the series bring us!

Faerie teeters on the brink of war and the mortal realm swells with fae refugees desperate to escape the bloodshed. As a half-blooded fae, Marshal Thierry Thackeray has a stake in the outcome of both realms and isn’t afraid to knock a few heads together if it keeps the peace.

When her father goes missing, the only hope of negotiating a truce between the light and dark fae vanishes with him. Eager to avoid another Thousand Years War, the Faerie High Court reaches out to the one person they believe can track him down—the daughter who shares his curse.

Reviews in the Series:
Dog with a Bone by Hailey Edwards (Black Dog #1)

One response to “Review: Heir of the Dog by Hailey Edwards”