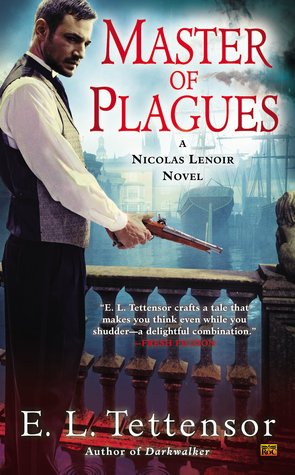 Gikany and Una have been on pins and needles, anxiously awaiting Master of Plagues.  Ms. Tettensor did not disappoint!  Though this mystery was a bit different from the first, we still enjoyed the mythology, the world, and the twists and turns of this tightly woven story.

The novel opens as a plague is starting to decimate one of the outlying areas of Kennian.  Lenoir and Kody are called in to determine if the epidemic was intentionally caused and if so who might have orchestrated it.  As the clues are slowly uncovered, our heroes find themselves in the sights of the mastermind of it all.

Without spoiling the novel, let us just say it was great.  Master of Plagues takes place in the wonderfully gray world of Darkwalker.  This alternate world fascinates us with its combination of different cultures and politics.  Although the paranormal aspect that we loved in the previous novel was absent in this one, we still found it engrossing.  The prejudices that exist between the Adali and Kennians were even more poignant in this story.  The Adali have the ability to cure the plague, but the physicians dismiss their treatment as witchdoctor rubbish.  Watching as Lenoir works to ease the prejudices enough that some cooperation can exist was fascinating.

What truly sets off this gray world is the contrast we have between Kody and Zach.  Kody is one of the few people who still sees the world as black or white.  He is young and idealistic – reminding Lenoir of who he once was and will never truly be again.  Zach, on the other hand, can see all of the shades of gray.  His understanding of how the world works allows him to survive and yet still dream of being a hound.  Zach adds the bulk of humor and innocence to this story.  The contrast of Kody and Zach helps to highlight the changes in Lenoir.

Upon the conclusion of Darkwalker, we wondered what character growth would manifest in Lenoir as Master of Plagues unraveled.  When Una mentioned to Gikany that Lenoir seemed almost just as he was, her response was, “you were looking for miracles?”  Despite Lenoir appearing almost unaffected by his experiences, there were minute changes that could be easily overlooked.  Without Lenoir’s inner monologue, we would have continued to believe, as those around him do, that he is unchanged – except for a new zest for work.  He once again dives into cases, working diligently to find the perpetrators and bring them to justice.  But he has discovered how much he has begun to care for the people in his life — even if he was only able to show his care in his own sharp and cold way.

The Nicolas Lenoir series is shaping up to be a truly engrossing and fascinating series.  Though the paranormal aspect was missing in this mystery, there is enough of the strange in the Adali to keep it hauntingly rich.  Though Lenoir is again burning with a passion to see justice done (and hopefully redeem himself a bit) he remains excessively arrogant and egotistical and wonderfully insightful and capable.  With Kody and Zach at his side, we eagerly await the next novel in this dark but captivating world.

Unraveling a deadly mystery takes time—and his is running out…

Having barely escaped the clutches of the Darkwalker, Inspector Nicolas Lenoir throws himself into his work with a determination he hasn’t known in years. But his legendary skills are about to be put to the test. A horrific disease is ravaging the city—and all signs point to it having been deliberately unleashed.

With a mass murderer on the loose, a rising body count, and every hound in the city on quarantine duty, the streets of Kennian are descending into mayhem, while Lenoir and his partner, Sergeant Bran Kody, are running out of time to catch a killer and find a cure.

Only one ray of hope exists: the nomadic Adali, famed for their arcane healing skills, claim to have a cure. But dark magic comes at a price, one even the dying may be unwilling to pay. All that’s left to Lenoir is a desperate gamble. And when the ashes settle, the city of Kennian will be changed forever…

Reviews in the Series:
Darkwalker by E.L. Tettensor (Nicolas Lenoir #1)

5 responses to “Review: Master of Plagues by E.L. Tettensor”