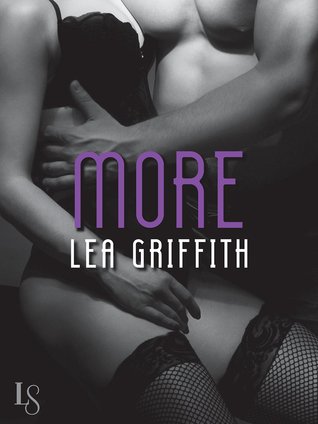 More opens three years in the past, where readers learn of a passionate love affair between Ruthie Copeland and Tobias (Toby) Edwards. Ruthie has always known a bit of Toby’s hidden desires to master and control sexual situations; he is a Dom, but he has kept that side of his life from her. One unforgettable night, Ruthie offers herself to Tobias completely, and after begging him to take her as he needs to, he finally gives her everything. However, the next morning, he is gone, demanding Ruthie leave and never return. Fast forward to present day when Ruthie returns to her home in Atlanta, determined to make Tobias hers forever. But will she have the mental and emotional strength to break down Tobias’s walls?

When I picked up More, I didn’t realize that it was the second story in a series. While the author does a fine job pulling in the backstory as needed, I did feel like I was missing out on much of the history between several of the players in the book. It was obvious from comments and scenes that the core characters in the story have a long, shared history, and I wondered if I would have enjoyed the tale more had I read the first book, Too Much. With that in mind, I suggest to anyone new to the series to start at the beginning.

Overall, I enjoyed More; however, I had some issues. The opening prologue and start of the book was emotionally gripping. I found myself empathizing with Ruthie and wanting her to find her happiness. It drew me in and kept me glued to my Kindle. However, while I adored Ruthie, I found her attitude and self-esteem problematic at times. Ruthie is a strong woman with gianormous balls! She comes back to Atlanta, to a man who tossed her out, demanding his attention. But honestly, I felt like she was too often begging for him to love her after she gave him the biggest gift she could ever give (herself), and he threw it away. I hated to see her implore Tobias to take her back when instead, Tobias should have been groveling big time and begging her to come back!

In addition, Tobias is not a good man. While his heart may be golden when it comes to Ruthie and his friends, he is involved in dark, criminal actions. While I personally enjoy the bad boy trope in romance, I like for the heroes to be inherently good, rather than criminals. And I never felt that Tobias honestly loved Ruthie in a manner she deserved. He was too aggressive without compassion. His need to dominate felt stronger than his love for Ruthie. Even after the book was over, I felt that Tobias would never change his ways.

I did enjoy many parts of the book, to include some of the romance between Ruthie and Tobias. The pair shares sizzling physical chemistry and some smoking scenes. In addition, there was a fair amount of suspense and an antagonist worthy of true hatred. Finally, I found many of the supporting characters interesting, and I am curious to know more about their individual stories.

In the end, I really wanted to love More, but I just didn’t. I was immediately drawn in and excited to read the story; however, as the book progressed, I got frustrated with the lack of character growth and change, especially in Tobias. In addition, I wasn’t a big fan of the mafia storyline. Tobias isn’t a nice guy, and although he loves Ruthie, he doesn’t have many redeeming qualities. While I didn’t love More, I did enjoy it and feel that it would make for a wonderful storyline for those who enjoy darker romances.

Toby stopped feeling after Ruthie left, stopped expecting to find release in meaningless dominance play. Now that Ruthie has taken their dance to the limits of ecstasy, Toby’s lost in a haze of sensation. Yet the enemies that left him disfigured may reappear at any moment. Ruthie’s love gives him the strength to face those who seek to break him, but Toby fears he must leave her to save her life.

Purchase Info:
More (All or Nothing #2)