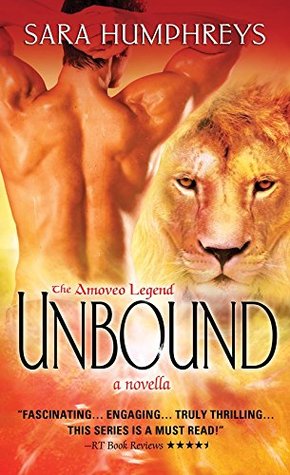 Unbound is a short and sweet novella in the Amoveo series. Zach, a guardian and lion shifter briefly introduced in Unclaimed, has accepted that he will never find his mate.  Therefore to live life to the fullest, he heads to the beach for a little rest, relaxation, and recovery from wounds he received in the previous novel.

Zach comes to fear that his mate is human which means that even if he mates with her, he will lose his powers anyway.  However, Annabelle is no simple human.  She has a gift of seeing people’s past with her touch.  But it is not her gift that is dangerous, but her familial connections.  Annabelle is related to the Caedo family, a group of humans who are trying to annihilate the Amoveo.  She knows who and what Zach is, and in order to protect him, she tries to deny him.

Overall we enjoyed this novella.  It is cute and a light read.  We thought that Zach and Annabelle’s story could have been much longer.  We wanted to learn more about Annabelle and her Caedo family.  We had a short peak into Annabelle’s history but learned almost nothing of Zach’s.  The smexy scene in the middle dominated the page time, but it was passionately fun.  It was a bit confusing to the mythology that an Amoveo who mates with a human loses his powers.  We did not recall this tidbit and felt the need to reread the previous novels to clear up our confusion.

Although the ending felt a bit weak and that Zach was being so overprotective that he doesn’t give his people the benefit of a doubt, we did like Unbound.  We hope to see more of Zach and Annabelle in the future; we have faith in the Amoveo with their victory over the purists and that Zach’s distrust of his friends will be proved wrong.  For any fans of the Amoveo series, this is a smexy must read.

The forces that bind them can also tear them apart…

Zachary McKenna is a warrior shapeshifter from the Lion Clan, trying to catch a break in the sun and surf of Mexico. Mai Tais and scantily clad beach beauties are just what he needs after his last battle. But the fun doesn’t last long before a beautiful young woman is mugged on his doorstep and Zach is pulled right back into the fray.

Zach has no idea of the danger Annabelle has unwittingly brought to his doorstep, until he discovers that losing her will almost certainly destroy him…