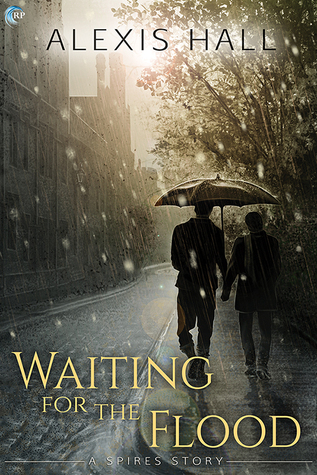 Waiting for the Flood
Author: Alexis Hall
Reviewer: B.
Rating: A

Once again, Mr. Hall has written something I absolutely love. Recounting the story of Edwin Tulley, collector and conservator of rare books and ephemera, Waiting for the Flood is a stand alone story and the second in the Spires universe, and, unsurprisingly at this point, I was just as taken with it as I have been Mr. Hall’s other books. It is a tale of final goodbyes and new beginnings, and remembering that it’s okay to want someone, and then be loved right back.

Edwin is remarkable, at least in part, because he is so certain that he isn’t. He is lonely and brilliant, and works endlessly to marshal his consonants into their proper order, only to have them rebel against him traitorously just when he has something important to say. Yet, he persistently braves the linguistic obstacle course of conversation, dodging many of the sounds that are to be avoided at all costs, while marching resolutely straight through others. Edwin loathes pity, but is kind-hearted, and really only wants to care about someone enough to remember their dates of importance and how they take their tea. I couldn’t help but love him.

Adam Dacre, civil engineer and flood warrior, is equally likable and is a hero, too. He has scars, inside and out, both from mistakes of the heart, as well as those borne of his passion for helping others. While he’s fighting to save Oxford from the flood, he also manages to fall for Edwin, regardless of the latter’s initial self-determined position as something someone else left behind. He is probably the only person (except for Edwin’s wonderful neighbor, Mrs. P) to see Edwin as he truly is. He knows the difference between sharing sorrow and offering pity, and isn’t one to let what he wants slip by without trying for it. He is rough and warm and just the thing for Edwin’s cold feet.

Unique in both its imagining and delivery, every chapter except the last of Waiting for the Flood is prefaced with Edwin’s memories of specific locations within his house, each one richly painted with color and movement, before launching into the first-person narration itself. As he typically does, Mr. Hall imparts a familiar openness to this story, the details precise enough to give them definition, while making it easy for the reader’s imagination to become entangled with the scenes as they unfold. It’s truly gifted storytelling at work here, and relating to Edwin was as effortless as it was rewarding.

So far, I’ve enjoyed everything I’ve read by this author immensely, and Waiting for the Flood is no exception. Despite the fact that his writing is consistently rhythmic and evocative, Mr. Hall always manages to tell a fine story. While the specifics of Edwin’s situation may be unfamiliar to many readers, I think most everyone can recognize the battles they may have fought, or continue to fight, through them. Mr. Hall’s ability to write complicated emotions and experiences succinctly, yet with a profound sense of empathy, is an enviable one. He could write a novel about peanuts, for that matter, and I’d happily read it. While it’s part of a bigger universe, Waiting for the Flood is a standalone book, although its predecessor, Glitterland, should definitely not be missed. With the promise of even more books in this universe to come, I’m certain they will always be among my absolute favorites.

People come as well as go.

Twelve years ago, Edwin Tully came to Oxford and fell in love with a boy named Marius. He was brilliant. An artist. It was going to be forever.

Two years ago, it ended.

Now Edwin lives alone in the house they used to share. He tends to damaged books and faded memories, trying to build a future from the fragments of the past.

Then the weather turns, and the river spills into Edwin’s quiet world, bringing with it Adam Dacre from the Environment Agency. An unlikely knight, this stranger with roughened hands and worn wellingtons, but he offers Edwin the hope of something he thought he would never have again.

As the two men grow closer in their struggle against the rising waters, Edwin learns he can’t protect himself from everything—and sometimes he doesn’t need to try.

Purchase Info:
Waiting for the Flood

One response to “Review: Waiting for the Flood by Alexis Hall”