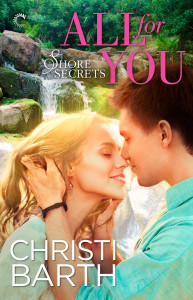 A single vision of six feet of toned muscles and charm tormented her. Her thoughts had slipped back to last night’s lip-lock with the professor…um…often. If often meant reliving it over and over again pretty much every time she blinked.

He’d called her beautiful more than once. His brain had chilled down to a temperature barely warmer than gelato, and yet he’d made a point of complimenting her. Long before he’d put his hands on her. That earned Zane a gold star. Of course, the way he kissed earned him enough stars to fill the Milky Way. That man knew his way around a pair of lips. Casey was far from a virgin. And she enjoyed tiptoeing through the tourists every summer just like all the other local singles.

But he’d stood out. She’d spent all morning trying to figure out why. Was it his commanding strength overlaid with tenderness and finished with a whole lot of sex appeal? Guess she’d lived in the heart of the Finger Lakes wine country too long when she started describing kisses the same way she described a glass of Riesling. Aaand that made Casey think about what it would be like to kiss him with wine-slicked lips. To taste the honey and apricot sweetness on Zane’s rough tongue as it plundered her mouth…

The thwap of the screen door on the outer office sent her hands flying to her face. Casey didn’t blush. Didn’t see a need to be that embarrassed about anything. But she tested the temperature of her cheeks anyway, because her core temp had just shot up ten degrees with that little fantasy. They felt hot. Hopefully anyone looking for brochures or bathrooms—her two most asked questions—would attribute the flush to summer. Even though this early in summer, they’d be lucky to hit eighty by mid-afternoon. Crap. Why was she worried? There was no cartoon thought balloon over her head flashing the words I’m having sexy thoughts in pulsating neon.

Flustered, she smoothed the wispy tendrils at her temples that always escaped her French braid. “I’ll be right out.”

“How about I just come all the way in?” Zane’s head and shoulders popped sideways around the doorframe. His hair flopped over his forehead the tiniest bit. It was adorable. Paired with the ear-to-ear grin, it made him look mischievous. Ready for fun or trouble. Probably both, if last night’s idiotic illicit dive was anything to go by.

“Um, okay.” It surprised Casey how happy she was to see him. God, what was wrong with her? That was as much a lie as the ten pounds she’d shaved off her official weight when she renewed her license last month. And lying to yourself was always pointless. So, yeah—happy to see him. So happy that she did a quick mental check on whether or not she’d worn the lined bra that would hide the effect his presence was having on her nipples. The surprise centered more on the fact that he’d found her. That he’d taken the time to find her. As much as Casey hated it, years of habit kicked in a tiny dose of suspicion. “How did you track me down?”

He eased the rest of the way into the room, tapping the nameplate on the door proclaiming her Park Manager along the way. “Finding things out is sort of my specialty.”

Casey sucked in a breath. Then held it as she actively ignored her knee-jerk alarm at his statement. Her ingrained, over-developed caution? Ridiculous. A random, submarine-hunting college professor had no interest in her past. Make that a random, hotter than Indiana Jones submarine-hunting college professor. And if, by some stroke of very bad luck he actually did, he’d be frothing at the mouth to ask her questions. Not avidly reading the chart along the wall depicting the life cycle of a forest. “So, you researched me?”

“Of course not.” His swift response held a tinge of outrage as he twisted around. “I only asked where you worked.” A cocky grin quirked his lips up at the corners. “But I’m betting I find out everything else I want to know about you before too long.”

Casey didn’t take or make sucker bets. The professor might well be the best darn researcher on the planet. He might even find the legendary submarine. But he damn well wouldn’t learn everything about her. Nobody ever did. His eagerness to dig into her life dimmed the pleasure of seeing him. Just a tiny bit. The way a porch light dimmed for a moment when a moth flew past.

At her overly long silence, Zane’s eyebrows drew together. “Look, I just wanted to see you again. I met some friends of yours—Ward and Gray?—back at my hotel and after they vetted me, they told me you worked here. I’m not stalking you.”

She stood. Came around the desk to hook a finger in the collar of his white camp shirt. Stood on tiptoe to whisper in his ear. “Well, if my friends gave you the thumbs up, I should probably just clear off my desk and drop my panties for you right now.”

“Should we maybe close the door first?”

His easy acquiescence cracked her up. Laughing, she backed away to lean her butt on the edge of the desk. “You don’t get fazed by much, do you?”

“I learned a long time ago that the world is full of surprises. Simpler to roll with them than to freak out.”