The Shape of Temptation 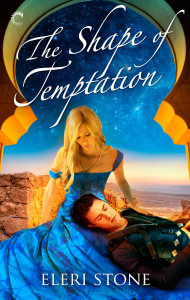 Kailey had never seen a nude man before aside from the statues they’d studied. When she’d first come to Lasura, it had been a shock to see how little clothing the people of the capital wore. Often their arms were bare to the shoulder. Sometimes the men wore nothing at all above the waist. Once, she’d seen Benim in the practice yard clad only in the red tunics all the guards wore and the leather boots that came to mid-calf. Sweat coated his skin and maybe she should have been repulsed by that but she hadn’t been. The sheen only emphasized the beauty of his body. The heavy slab of his chest and the rippling tautness of his abdomen. The sleek pull and stretch of the muscles in his arms and legs.

She hadn’t realized she’d stopped walking that day to gape at him until Jin had nudged her in the ribs and snapped at her to close her mouth. “Don’t let anyone see you gaping at the guards. It’s disgusting.”

Kailey didn’t understand that. To her mind, there was nothing disgusting about the sight of Benim’s body. Disturbing, absolutely. Disgusting, no. There were rules of conduct here in Saria she simply didn’t understand, but the people clung to them like they’d dropped from the mouth of the creator. What to wear. How to speak. Who you were permitted to speak to. There were entire groups of people in the capital who simply weren’t allowed to mingle.

Mages were in a class by themselves, elevated, honored, separate. They didn’t make friends with those of low station and if they took them as temporary lovers then they kept that to themselves. Only one of a million befuddling rules she’d learned since first arriving here.

And now she was alone with Benim. He was standing in her workroom and he was taking his clothes off. She did not know the rules for this. She set to work folding the tarp. Her hands shook when Benim’s sandal thumped to the floor, but she kept her gaze averted.

She set the tarp aside before taking a steadying breath and turning. He was naked. Beautifully, gloriously, unabashedly naked. The skin at the corners of his mouth indented slightly and she knew he was hiding a smile. Her hope that he wouldn’t notice her reaction fled and her skin warmed. Felt tight and itchy as a sunburn.

His hands were loose at his sides. His head slightly cocked as he awaited her answer. His legs were surprisingly shapely for a man’s and pale at the ankle where the sandal straps would lay. The skin at his midsection was pale too. Dark hair covered his legs and made a nest for his flaccid penis. That she wanted a closer look at but instead she followed the line of hair to his abdomen and chest, finally wresting her gaze up to his face. She braced herself for mockery but there was none. His brows twitched upward ever so slightly in an expression that was like a shrug. As if to say, “This is it. Nothing threatening here. I do this every day.”

As if any of this could be normal.

She couldn’t remember what it was he’d asked her. There was no way for her to bluff her way through this though she knew he wouldn’t call her on it if she decided to try.

“I’m sorry,” she said, her voice hoarse. “I’ve never done this before and it’s just…the people here are so different. I’ve never seen a man undressed.”

She shook her head, felt her cheeks warm even further. “My people don’t walk about without their clothes on.”

“During the summer, you wear short dresses. Material so thin that water and sweat makes it near invisible.”

He glanced out the window and his eyes unfocused. “Your men wear shirts even into battle. I always thought that strange but didn’t realize it was forbidden to bare your chest.”

“Not forbidden, exactly. Just…not done. And you’re exposing far more than your chest.”

His gaze shot back to her and he laughed. “I suppose I am. If you need time to get used to the sight, take it. Look your fill, Kailey. I don’t mind.”

At that, he sat down on the bench, legs spread, arms resting on his thighs as he bent forward. His penis hung there limp but imposing all the same. His sac stretched ever so slightly and she wondered at the weight of it. It took a great deal of effort not to stare.

Cheeks burning, she finally met his gaze. “I can tell it doesn’t bother you in the least. That almost makes it worse.”

The smile he’d been holding onto got away from him. “You can touch if you like.”

His eyes sparkled. “A quick and brutal way to accustom yourself to my body. It’s what the others do.”

Her head came up, curious. “They do?”

He nodded. “I don’t always welcome it but with you…I wouldn’t mind.”

2 responses to “Sunday Snippet: The Shape of Temptation by Eleri Stone”