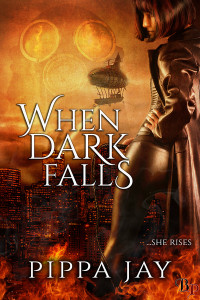 Nocturnelle perched on the carved griffin statue decorating the tower’s cornerstone, with hundreds of feet of empty space between her and the ground below. Her second skin felt tight. It was a familiar sensation and yet always the first thing she noticed on waking, as if her body needed to remind her of the fact. She stretched and her outer skin crackled like leather. She flexed her fingers, the delicate oh-so-white digits a stark contrast to her black arms. Silver lines marked her left forearm, and she frowned at them. She was meant to be impervious to blades and bullets, and yet somehow, not too long ago, she must have injured herself.

As she rose, her skin creaked. She stretched again, and then tugged her hands through her hair, pulling the thick swathe of black silk from her face and knotting it at the back. Darkest Night forbid it should get in her way. The second skin pressed tight against her forehead, running around her eyes and mouth, cradling her chin. She ran her fingers around the edges, tracing the outline. Perfect. Her body tingled as though electricity danced in her veins, and she smiled. Breathed in the evening air. This was her time.

Viscous and reeking, the night sky hung over the city of Art Deco towers and buildings like an oil-slick. Behind her, the metallic chinking of the cloudburner cooling after a day spent scorching the sky ticked away the seconds like a clock.

The deep male voice sent a shiver down her back, and she turned. “Ah, my faithful Shadow. Ready for another night-time jaunt?”

A figure stepped out of the shadows to join her. He matched her for height; his whipcord frame clad in a charcoal-colored armor vest, black combats, and a hip-length military jacket. When the rooftop lights hit his face, the chiseled jawline showed; his skin a dark tan. He wore a mask over his eyes, but his teeth gleamed white when he smiled. And when he smiled, something inside Nelle set her heart racing.

“Excellent.” She nodded to him. As one they yanked grapple hooks with lines from their belts and tossed them toward the spire of girders that surmounted every tower run by Dark. The auto-clamps engaged on contact, grasping the metal post tight in unrelenting jaws. Nelle jumped from the rooftop first, and gravity snatched the air from her chest.

Floor after floor of lit apartment windows rushed by her, as dizzying as the wind whipping through her hair. The jolt as she hit the cable’s end made her laugh. She let loose an exultant cry as she swung in a graceful arc around the edges of the tower and the rotund shape of one of Dark’s airships cruised toward her.

She angled her body, feet braced ahead of her, as she flew at and then over the curved plane of its left wing. As she skimmed across the surface, she reached the fullest extent of her swing, and she slowed. Gravity began to pull her back. She hit the release and landed in a perfectly balanced crouch, grasping the wing ridge to keep her steady. An instant later, Shadow was by her side.

She grinned at him. “Great way to start the night!” she yelled over the rotating blades of the steering propellers.

“As long as we finish the night in one piece,” Shadow hollered back.

“Pessimist.” Nelle scrambled along the wing toward the main bulk of the ship, where the maintenance hatch gave them access inside. Once the door had been closed, the hull muffled the propellers somewhat, but the rhythmic sound echoed, a deep vibration that thrilled through her body. She scooted along the narrow gangway leading to the nose of the airship, her boots making the metal clang with each step. Tremors in the handrails told her Shadow followed close behind. Once they reached the front, the gangway ended above another hatch, this one into the bowel of the ship. Nelle dropped beside it and waited, Shadow at her side.

The airship was the only way into Dark’s most secret lab, set at the top of a steel and glass tower at the heart of Nephopolis. Above it stood the largest of the cloudburners, and the very first. The one that had brought the false darkness the professor craved. It had burned the sky the day before Blaze had his final confrontation with the professor and been defeated.

Nelle didn’t remember the night Blaze had fallen. In fact, she couldn’t remember anything before then, except hazy memories of pain and a strange purple light. Ice, the Alliance of Super Heroes and Heroines’ medic, had told Nelle she’d lost her memory during that battle, just as Blaze had lost his powers and the other minor superheroes had fallen under the nightcrawlers. Shadow had found her injured and unconscious in the ruins, and no one could identify her. Now there was just a handful of them left, no match for Dark and his minions, but still fighting underground, trying to regain the city. It was a slow, grim, and thankless task.

Most nights she wondered why she did it. And then she remembered. Dark had given her the pain and taken her memory. She might not care about the city, or the people, or even the League of fallen superheroes. But Dark had taken something from her and she wanted payback. It was all she had left.

4 responses to “Sunday Snippet: When Dark Falls by Pippa Jay”