Today I welcome Christi Barth to That’s What I’m Talking About. In celebration of her newest release, All for You (Carina Press, February 9, 2015), she’s here to tell us about the number one thing that drove her crazy while writing her book…

Number One Thing That Drove Me Crazy Writing My Book

Whoops-maybe that title isn’t a great hook to get you to want to read my latest, awesome release, ALL FOR YOU. But everyone always asks me about the writing process. Is it fun? Is it hard? Do you get stuck? (BTW, the answers are yes, yes, and YES.) So I thought I’d be totally honest with you guys. Show you a little behind-the-scenes crazypantsedness of what actually goes through a writer’s mind.

I love writing. I especially loved writing All For You, because it is book 2 of a trilogy, which means returning to characters I’d already come to love as well as laying all sorts of sticky, interesting groundwork for book 3. I loved writing the banter, the growing sexual tension, the super-romantic scenes.

There are, however, problematic days, when the words don’t flow quite right. How I had to delicately tread a fine line on the serious topic of cults in my light, romantic comedy plot. When it became difficult to keep both men likeable who pant after the heroine in the love triangle. And don’t get me started on deciding who needed to literally and figuratively be on top in the sex scene.

But here is the #1 thing that drove me absolutely bonkers: Woodpeckers apparently don’t migrate. I know, I know, you’re wondering if you are still reading a post about a romance. But this little fact drove me nuts for DAYS. Here’s my original draft of a conversation between the hero and the heroine:

“Your lectures are brilliant?” She piled the mocking on top of the word higher than Joel heaped whipped cream on top of his famous chocolate-red wine soufflé. Waited a minute to give Zane the chance to realize he’d ventured across the border into douchebag territory. But he didn’t retract it. “You’re so sure of that you want to announce it to the world?”

“I’m not the only one announcing it. Every major book reviewer, college publication reviewer, and the stack of awards in my office all prove it. My brilliance is well-documented. Hiding it would be futile. It’s a fact.” He spun on his heel to point at the poster about the migratory patterns of birds. “Just like the fact that woodpeckers fly south twice a year.”

“I think I’d rather be hanging out with the woodpecker.” Amazing that the interesting, considerate man she’d met last night had done such a one-eighty into an egotistical jerk.

The fact about the woodpecker makes zero difference to the plot as a whole. It was just a funny, toss-away line for my random factoid-loving professor to spew. Let me be clear—I know nothing about birds. Not a nature girl at all. Which is proof that I didn’t mis-remember this particular fact. I very clearly remember reading it on Twitter the very day I wrote this scene. Probably something like UberFacts. I would never bother to make this up.

But my awesome copy-editor evidently has bird knowledge, because she caught it in edits and said that woodpeckers generally don’t migrate at all. Could I have just deleted that joke? Sure. Could I have subbed in some other bit of trivia that would have the same effect? Sure. But nooooooo. It pissed me off. First, I swore quite a bit in the general direction of Canada and my copy-editor. I mean, what were the odds that some bird-a-holic would be checking my manuscript for comma splices? Wasn’t it very likely that the majority of people would just chuckle at my joke and keep reading?

Secondly, as a responsible author, I knew I had to strive to present the truth. So what did I do next? I dug in. Hard. I’d learned that fact somewhere, and that meant it had to be true. There had to be some damn species of woodpecker that would get chilly and get out of Dodge. I scrolled through DAYS worth of the UberFacts Twitter feed. Nada. I Googled like crazy. I wound up studying migratory charts. Textbooks. Learning just how many damn species of woodpeckers are flying around out there. I did not give up on this quest until the day my edits were due back. I’d been finished for a while—I just couldn’t accept the fact that I had to change that one line that I knew, in my bones, to be correct (despite many educational treatises telling me otherwise).

He finished off his smug statement with a smirk. “Hiding it would be futile. It’s a fact.” He spun on his heel to point at the poster about the migratory patterns of birds. “Just like the fact that most woodpeckers don’t migrate at all.”

Simple, right? Beyond ridiculous to have gotten so frustrated about this, right? To have wasted so many actual hours on something so minor? Maybe its that I’m stubborn. Or maybe its just that once I wrote Professor Zane Buchanan saying those words, they became fact to me. Because in my mind, in the world I created, the conversation between Casey and Zane really happened. That is how deep authors get when they write a book. I hope you get sucked in just as deeply when you read it! 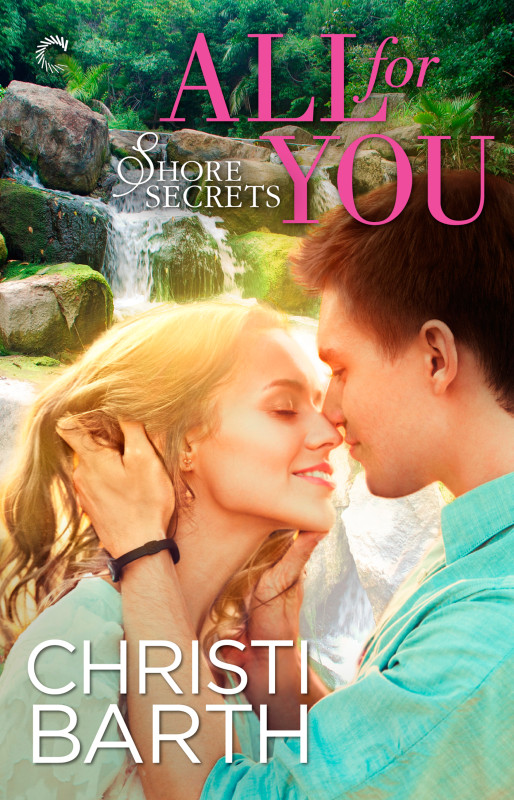 All For You – Book Two of the Shore Secrets Trilogy

Small-town park ranger Casey Hobbes has spent her life under the radar, carefully guarding a secret. “The forest flirt,” as her best friend calls her, keeps things casual with men. That way she’ll never care enough to be tempted to share the truth about her past. But when she spots a half-naked stranger on the lake’s edge, Casey can’t resist his muscles or his charm and she’s all-in for enjoying both, while keeping emotion out of it. What could be the danger of one summer fling?

Professor Zane Buchanan has built his entire career on exposing the dark realities of cults, but one—the Sunshine Seekers—remains infuriatingly impossible to crack. Zane’s shocked to discover its sole anonymous survivor is hiding in his new hometown. It’s nearly impossible to concentrate on work, however, when he’s derailed by his attraction to the beautiful blonde in khaki uniform shorts.

As things between Casey and Zane heat up, she struggles with keeping her past from him. And Zane’s on a quest to expose the truth, no matter the consequences. Will their growing emotions finally unseal Casey’s big secret? Or will she turn her back on love to keep the past safely buried?

Christi Barth earned a Masters degree in vocal performance and embarked upon a career on the stage.  A love of romance then drew her to wedding planning.  Ultimately she succumbed to her lifelong love of books and now writes award-winning contemporary romance.  Christi is President of the Maryland Romance Writers and lives in Maryland with her husband.