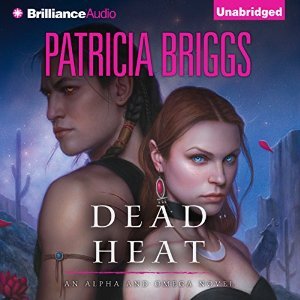 Having recently devoured the Alpha and Omega series by Patricia Briggs, I found myself anxiously awaiting the release of Dead Heat over the past couple of months. Werewolf mates Anna and Charles Cornick have become one of my favorite book couples because of their well-balanced and loving relationship. The urban fantasy series, set in a world filled with dangerous Fae and newly outed werewolves, splits time between an action-filled paranormal/UF plot and the emotionally satisfying love story of Charles and Anna.

For the second book in a row, the story takes place outside the normal pack setting. Anna and Charles find themselves in Scottsdale, AZ visiting Joseph, Charles’ longtime friend who is near death, and to purchase a horse from Joseph’s family for Anna’s birthday. Unfortunately Charles and Anna’s getaway is cut short when Joseph’s daughter-in-law and grandchildren are the target of a Fae attack. Soon the pair are reunited with FBI Special Agent Fisher (Fair Game) and the hunt begins for a deadly Fae with a taste for young children.

Like its predecessors, Dead Heat is a marvelous mix of action-filled conflict and thoughtful character interactions. The storyline following the malevolent Fae and its horrific actions is suspenseful and well-written, leaving readers guessing who is behind the attacks and what are the motivating factors. Ms. Briggs excels at laying out clues and feeding bits to readers a little at a time, which kept me glued to the pages and in a hurry to find out what was happening. While the storyline behind Dead Heat is all of the above, I was a little disappointed that more was not discussed regarding the significant events occurring at the close of the previous book. I want to know what motivates the Fae and what is going on with their self-imposed exile. Maybe this storyline will play out more in its sister series, the Mercy Thompson series.

One thing that I did appreciate is that there seemed to be a great percentage of the book spent on the personal interactions of Charles and Anna. Readers learn more about the mysterious Charles, including some of what motivates him and makes him the stoic man he is in present day. Through the process of horse shopping, we see a new side to both Anna and Charles, and I enjoyed following along on their efforts to find just the right animal to bring home to Montana. While the text could have been dull due to the in-depth discussions regarding the various animals, I found it exciting and interesting as witnessed through Anna’s point-of-view; her excitement and wariness were catchy. In addition, the process allows readers to glimpse into Charles’ recent past and a friendship that comes a close second to how he feels for Anna. And in that friendship, we also see more of how much he loves his mate. Additionally, there is a small side story about Anna wanting a baby. Initially, I felt this storyline was going to get out-of-hand, but I was pleased that it served as a means to once again allow further insight into the workings of these two characters, and ultimately, grow closer in their relationship.

Holter Graham’s narration is still one of my favorites. I enjoy his slow and purposeful prose, especially his voice of Charles. It’s hypnotic and soothing. Generally all of his voices were spot on, but I did have trouble distinguishing between Charles and Joseph’s werewolf father, Hosteen. However, I found Mr. Graham’s performance of the children’s voices a bit creepy, especially youngest grandson, Michael. None of the young children’s voices worked for me at all.

In the end, Dead Heat is a marvelous addition to one of my favorite series. If you haven’t already, I strongly urge you to give the Alpha & Omega series a try. It’s an excellent blend of action, romance, urban fantasy, character development, and romance!

Story: A-, Enjoyed it a lot
Narration: B, Liked it