Back at the beginning of the year, I started to work on my TBR pile by listening to audiobooks for some high-volume series. One such series that has been on my TBR for a long while is the Night Huntress series by Jeaniene Frost. I posted my thoughts on the first three books in the series back last month, and here is my review of the fourth title in the series… Note: this review contains spoilers from previous books in the series. 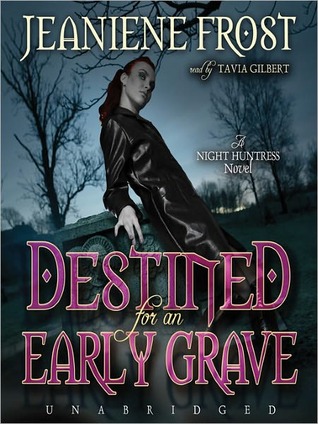 The fourth book of the Night Huntress series finds lovers Cat and Bones on a much needed vacation. But knowing their luck, it doesn’t last long and soon the pair discover that a not-so-nice vampire is after Cat, claiming to be her husband. I’m not going to sugar-coat this… I absolutely HATED the premise for the story. My eyes were rolling and face grimacing over and over as the plot came to light. The fact that there is a big chunk of Cat’s youth ripped from her memory and we just now find out about it bothered me. Additionally, I am a bit tired of all of these vampires that want to collect Cat. Unfortunately, this situation brings out the worst in Bones and I grew to dislike him over the course of the book. He was cruel, and I don’t feel that he made up for his actions by the end of the book. There was so much bickering and arguing, Cat blaming herself, and Bones saying “This is who I am.” I fell out of like of this couple.

I am glad the plot was resolved by the conclusion of Destined for an Early Grave, but I almost didn’t care by the time it was over. I will agree that there are some highly emotional parts that did grip and my heart and pull on my heartstrings. But unfortunately the few shining moments didn’t make up for all of my issues with the book.

While I had issues with the opening, the story did pick up for me midway through. I found that regardless of how we got to that point, the story was gripping and compelling. Once I hit a certain point, I found that I couldn’t stop listening until the end. This is what saved the book for me in the end; however, I am going to take a break from the series for a little while. Emotionally, I need to get away and start fresh after a respite.

The narration by Tavia Gilbert continues to be above par, and I enjoy her interpretation of both Cat and Bones; however, her voice for Gregor, a Frenchman, sounded too forced – like a fake French accent. Yet, she is part of why I continued to listen to the book even when I was frustrated with the story.

10 responses to “Listen Up! Audiobook Review: Destined for an Early Grave”