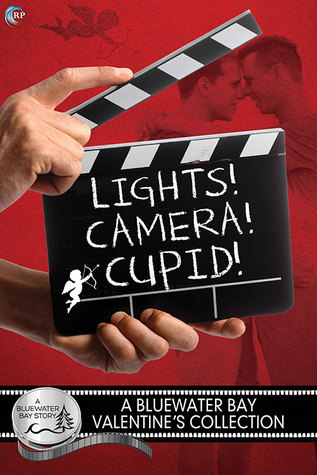 Revisiting Carter Samuels and Levi Pritchard, the couple whose story kicked off the Bluewater Bay series, was a great way to begin this anthology. In Just Another Day, Carter and Levi discover that, even though they’ve been together for a while now, they still have a lot to learn about one another, including how to celebrate Valentine’s Day. While he’s not a fan of the commercialization of the holiday, Carter maintains a romantic optimism about the occasion—which, naturally, clashes horribly with Levi’s stubborn cynicism. While the resulting impasse threatens to ruin everything, it also forces both men to be more honest with themselves and each other. Of course, the best thing about fighting is making up, and Levi comes up with a gesture that is guaranteed to win Carter’s heart all over again.
Nascha, by Amy Lane, was the most unique of the stories included, and probably my favorite, as well. I’ve read a few stories by Ms. Lane, and Nascha was certainly one of the most memorable. As a community elder with Alzheimer’s, Nascha spends most of his time in this story drifting between the past and present, and, through these memories, we see the events that have shaped his life to this point. Ms. Lane’s addition to the anthology is no light-hearted affair, but is, instead, one of intolerance, loss, duty, longing, and love. Nascha gave me a lot to think about, and I feel that it is the deepest, richest story in the collection.

I was excited to see that SE Jakes had written No Easy Way for this anthology since I’ve been a fan of hers for a long time now. Six years ago, Cary Teijan’s world fell apart when his boyfriend ran off to enlist in the Army. Now, Dylan James is back in Bluewater Bay, and he’s determined to reconnect with the man he never stopped loving. While both of the main characters have bad memories that must be dealt with before they can begin again, this is still one of the more light-hearted tales in the collection. No Easy Way is a sweet, sexy read and fits in with the other stories extremely well.

In Helping Hand, by Anne Tenino, we meet Lucas Wilder, high school senior and local misfit. Bluewater Bay might be the home of a popular television series, but for Lucas, it’s a trap. Nothing about Lucas fits with anyone’s expectations for him, particularly since he loves creating art, will never be a good logger like the other men in his family, and is gay. He knows what, and who, he wants, but being brave enough to reach for that future may not be a battle he can win. While I enjoyed seeing the town from Lucas’s perspective, and cheered him on during the more difficult moments, I found the ending to be a little disorienting. I understand why Lucas had to leave as he did, though, and would love to see if things could be better for him when he returns from college.

I’ll Be There by Z.A. Maxfield is another of my favorites in Lights, Camera, Cupid! Hell on Wheels was a fantastic story, and getting to read about Nash and Spencer again was a special treat. This time Nash has to fight his way through the snowpocalypse in order to be by Spencer’s side, and enlists his brother (and his battalion of super-brained assistants) to help. Watching the all the geeky goodness in action was as much fun as the rest of the story, actually, and I wouldn’t mind seeing even more of Ford’s world a little further down the line. Spencer, on the other hand has a difficult situation of his own to work through, and has to reconcile his past mistakes with the good he’s trying to accomplish now. In the end, I thought this story was a nice mix of humor, tension, and emotion, just as I had hoped it would be.

Overall, Lights, Camera, Cupid! is a wonderful collection of narratives from some very talented storytellers. Each one has a unique tone and purpose, and I thought the entire anthology was nicely thought out and well balanced. There’s probably something here for just about anyone who enjoys m/m romance, especially if they’re already familiar with the Bluewater Bay series. While I knew some of the characters, I was glad to discover some new ones, too, and I would love to read more about all of them in the future.

Cupid is visiting Bluewater Bay, and he’s leaving chaos in his wake.

Nothing’s been the same in this sleepy little logging town since Hollywood came to shoot the hit TV show Wolf’s Landing—especially Valentine’s Day.

In L.A. Witt’s Just Another Day, beloved actors Levi Pritchard and Carter Samuels have an announcement for their fans, while in Z.A. Maxfield’s I’ll Be There, actor Spencer Kepler and his boyfriend Nash Holly brave a blizzard and a fan convention to spend their first February the 14th together.

Of course, it’s not just TV stars celebrating the day. In Anne Tenino’s Helping Hand, an aspiring artist eager to escape Bluewater Bay decides he just might have a reason to stay: lust-inspiring logger Gabriel Savage. In SE Jakes’s No Easy Way, a local teacher reconnects with an old lover working security on the film set. And in Amy Lane’s Nascha, a Bluewater Bay elder recalls how his own unconventional family used to celebrate the holiday.

Real life may be nothing like TV, but when Cupid comes to town, there’s plenty of romance and drama to go around.