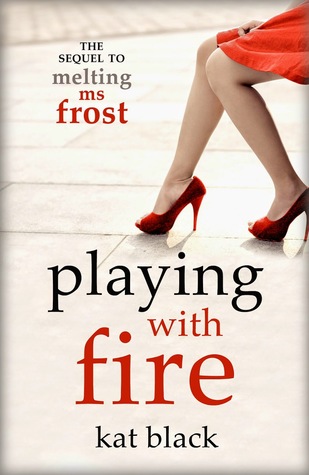 I admit it, I have literary hang-ups.  Among the worst offenders to me are titles that have little or nothing to do with the story, messy endings, and anything from words to whole phrases that are painfully overused.  Unfortunately, “Playing with Fire” is a desperately overused title in the romance genre.  An Amazon search yielded over 8,000 books of the same name.  Don’t let that put you off, however, because after I finished rolling my eyes, I discovered it’s worth the read.

Playing with Fire is the sequel to Melting Ms. Frost by British author Kat Black, and the two books should be read sequentially.  In fact, I would like to see them combined into one, tighter, longer book than divided as they are now.  Be that as it may, I definitely liked this one better than the first as I got to know the characters in a way that I didn’t in Melting Ms. Frost.  With the first book as the set-up, Playing with Fire raises the tension and stress pressing down on both main characters, Aidan and Annabel.  No one is “playing” in this book; everything that happens is serious and it’s for keeps.

In the back of my mind, feisty Annabel had echoes of a young Maureen O’Hara in “The Quiet Man.”  Today I would probably cast Bryce Dallas Howard.  I could totally see her opposite a slicked up Aidan Turner.  When I start mentally casting the movie, you know I’ve been sucked into the story and care about the characters.  Kudos to Black.

Secondary characters, billionaire playboy Damien Harcourt and the heavy metal singer Balthazar Hunt, make appearances again as well.  Their strong personalities make for a book with stronger action before we get to the story’s climax.  And what a climax—literally.  There is a sex scene near the end of the book that was almost difficult to read because it is that powerful.  It is a scene that is key to changing the dynamic and relationship between Annabel and Aidan.  Up until this point, Annabel’s insecurities were getting kind of annoying.  They were an easy excuse not to grow and that someone her age should have dealt with by now.  Aiden forces her to deal.  I already liked Aiden and fell in love with him again as I watched him see Annabel in a way she couldn’t see herself and then reintroduce her to herself.

Moving the plot between London and Ireland, Black’s British background lends the book a greater authenticity.  References like “jumper” rather than “sweater” are terms she probably didn’t even think about, but made me feel like I’d traveled to the British Isles and closer to the characters.  Given the setting, the book is better for it.  Like many British authors I’ve read, the story ends a bit abruptly, but uncharacteristically, Black eases us out with a lovely epilogue.  I got my tidy, happily ever after.  Although this is a great stopping place for Aiden and Annabel, I would love to see the two secondary characters mentioned above get their own books.  They have enough personality and set-up here to make this a short series.  The final location of Aiden and Annabel would lend itself as a wonderful backdrop to any number of books as people, famous and otherwise, move in and out of their lives.  There, I’ve dropped the gauntlet and I hope Black picks it up.

The steamy story of Annabel Frost and Aidan Flynn continues … Can you handle the heat?

Before Aidan Flynn had swept into her life with the destructive force of a wildfire, Annabel Frost had thought she’d had all she needed from her life. A successful career, financial independence, emotional restraint. Things that were safe, secure, steady. Everything her childhood hadn’t been.

Aidan represented none of that. Reckless and risky he’d been the red hot flame that melted the icy layers of her long-frozen heart. Having run from him once, Annabel should have learnt to leave trouble well enough alone.

But now Aidan is back, turning up the heat. And regardless of the danger of getting herself badly burned, Annabel can’t seem to resist the temptation to play with this particular fire.

Reviews in the Series:
Melting Ms Frost by Kat Black

2 responses to “Review: Playing with Fire by Kat Black”