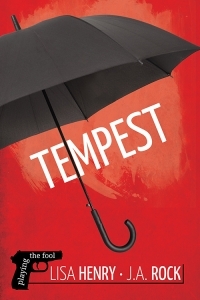 Picking up right where Merchant of Death left off, Tempest begins at a sprint and doesn’t slow down for the duration of the story. Agent Ryan “Mac” McGuinness, not quite formerly of the FBI, and Henry Page (aka too many aliases to list), along with Henry’s twin sister, Viola, are running for their lives and heading to the only safe place Mac can think of: his parents’ farm in Altona. Again. But, with few allies and even fewer clues as to who is setting them up, getting their happy ending will take more than even the most fitting Shakespeare references can do.

While I’ve thoroughly enjoyed all of the stories in the Playing the Fool series, I definitely liked Tempest best. It has just the right amount of everything I appreciate about the quirkier tales I’ve had the opportunity to read. Suspenseful and exciting, Tempest makes good use of simultaneous, yet disparate, scenes that put relatively pleasant happenings on a collision course with those filled with tension or danger, resulting in a fast-paced chain of events that kept me turning pages as quickly as I could.

Each main character has evolved a great deal since the first story, and, while not as obvious as Henry’s, I think that Mac’s transformation has been just as pronounced. Having admitted his feelings for the other man, at least to himself, he seems warmer and more balanced, even though his life has erupted in utter chaos with the addition of Henry. Now that Mac’s a fugitive, too, he’s become more empathetic about Henry’s circumstances, which, in turn, lends him more credibility with the very reluctant con man. Extra kudos also go to Mac for wanting to truly understand Henry, a development that provides more frustration for Henry, but, in general, is a better situation for them both.

Henry continues to be an ever more winsome and fascinating character, even more so than in the first two stories. Caring about Mac is a mixed bag for Henry, but the relationship really is exactly what he needs, no matter how much he wants to run from it sometimes. Tempest is precisely that for Henry, with threats and losses hitting him from all sides; the life he’d fought to build for himself crumbling down around him. I found it impossible not to ache for him. Even though this is an understandably more somber man than in the previous novels, Henry is still Henry, and he manages to steal every scene he’s in. Some of my favorite parts of Tempest are when Henry’s thoughts go skittering away from him in post-crisis, relief-fueled fits of mental and/or verbal entropy that often made me laugh so hard I nearly cried.

Although there are quite a few funny moments of note in Tempest, it certainly isn’t a comedy. Henry’s active self-hatred is often difficult to watch, especially with Mac’s increasing awareness of Henry’s many defense mechanisms. On the other hand, both men have been gradually lowering their guard with one another, and Henry’s tentative acceptance of his own needs is both sweet and hopeful. From the first scene it’s not at all clear how things could possibly work out, and yet, I found it impossible not to have faith that it would all somehow manage to be okay. There is also plenty of romance throughout Tempest, even if it isn’t always overt, a factor I liked very much. With every poke and quip from Henry, and every gentle touch and bid for patience from Mac, these two prove over and over that they’re a perfectly combustible fit. Taken as a whole, the Playing the Fool series is clever, fun, and well written, with enough humor and unexpected instances of real affection to keep me engaged from the beginning. Henry and Mac deserve every bit of happiness they can find, and it is my sincere hope that there might be more from them somewhere down the line.

Something wicked this way comes.

FBI Agent Ryan “Mac” McGuinness and con man Henry Page are on the run again. This time they’re headed back to where it all began: Altona, Indiana. Population: some goats. Henry’s not happy about lying low at the McGuinness family farm, but they’ve got nowhere else to go.

While Mac fights to clear his name and Henry struggles with whose side he’s really on, a ghost from the past threatens to destroy everything. And those aren’t the only storms on the radar. Cut off from both sides of the law, Mac and Henry must rely on their tenuous partnership to survive.

If Henry can convince himself to let Mac see the man behind the disguises, they’ll stand a chance of beating the forces that conspire against them. The course of true love never did run smooth, but for the two of them, it might be their only hope.