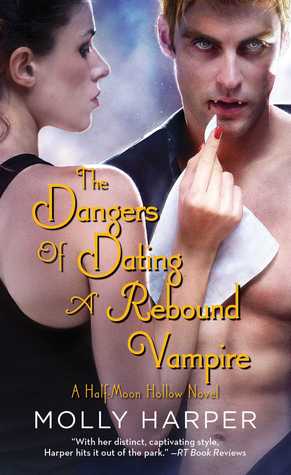 I can always count on Molly Harper to bring a smile to my face and joy to my soul; her stories are clever and characters always charming.

Following the events left hanging in the holiday-themed novella, I’m Dreaming of an Undead Christmas, it is summer and Gigi Scanlon is working at a summer internship with the local Vampire Council. While it is her geek’s heart dream job, filled with off-the-chart perks for Gigi, big sister Iris wants to keep her away from the dangerous vampires and shady council, especially after Gigi is attacked in the parking lot after work. However, Gigi has a secret history with her assailant and knows Nik is under a spell that compels him to attack her. Now she won’t rest until she figures out how to break the spell.

Although one could probably enjoy The Dangers of Dating a Rebound Vampire as a standalone, I feel the book is more rewarding having read the previous stories. Gigi’s world is filled with her quirky vampire extended family, whose bonds have developed over time, starting with the first book. Reading about Half-Moon Hollow and learning about its denizens prior to starting the book makes for a richer, more satisfying read. With that said, I do feel that reading the Christmas novella is critical setup for this book.

The romance between Gigi and Nik is fast-paced and a bit steamier than I recall from the earlier titles in the series. And even though things develop quickly between the pair, I’m okay with it because of the light-hearted tone and humorous feel of the book. Their banter is both silly and clever, playing off one another like long-time friends and lovers, which keeps the story moving forward and focused on the going-ons, rather than causing worry over if they will or won’t become a couple.

Returning characters add humor and depth to the book. Additionally, new characters, like Gigi’s coworkers, provide dimension and fun to the mix. If you are unfamiliar with the series you may get a bit lost trying to keep straight all of the players and their the crazy antics. For those who are readers of the series, you may be a bit surprised at the actions of some of the characters. I for one, was a little shocked as the events of the story played out.

Overall, The Dangers of Dating a Rebound Vampire is a highly entertaining book and a wonderful addition to the Half-Moon Hollow adventures! Filled with outrageous humor, silly mishaps, and marvelous characters who I have come to adore, I devoured the story in nearly one sitting. I found the mystery of what is happening to Nik to be well-executed, and even though the plot was a little obvious, I was still pleasantly surprised. Ms. Harper’s titles are completely amusing and delightful, and I highly recommend starting the Half-Moon Hollow series with the first book, The Care and Feeding of Stray Vampires.

In the next book in Molly Harper’s beloved Half Moon Hollow paranormal romance series, Gigi starts her first job (at Vampire Headquarters), gets over her first love, and may even fall for her first vampire!

Gigi is no longer an innocent teen. All grown up and looking for love, her family and friends worry she’ll go for the sexy, alluring vampire instead of a nice, safe human. But sexy and alluring, with a penchant for biting, could be just what Gigi wants…

18 responses to “Review: The Dangers of Dating a Rebound Vampire by Molly Harper”