Hello and thank you for joining me as I bid a fond farewell to Ty and Zane on the Crash & Burn virtual tour! For the next five days, join me on my virtual stops to help me say goodbye to the Cut & Run series with cut scenes, playlists, behind the scenes looks at the process of writing this last book, and a peek at the original plan for the series and the twists and turns it took on its journey to the end.

Did I mention the prizes? I have incredible prizes for two winners; a go-bag put together by one B. Tyler Grady. Each bag has over $370 worth of goodies in it. For more detail on the contents, you can click the link at the end of this post! Every comment on this blog tour enters you in a drawing to win one of these bags. Entries close at midnight, Eastern Time, on April 1, and winners will be announced on April 3rd. Contest is valid worldwide. 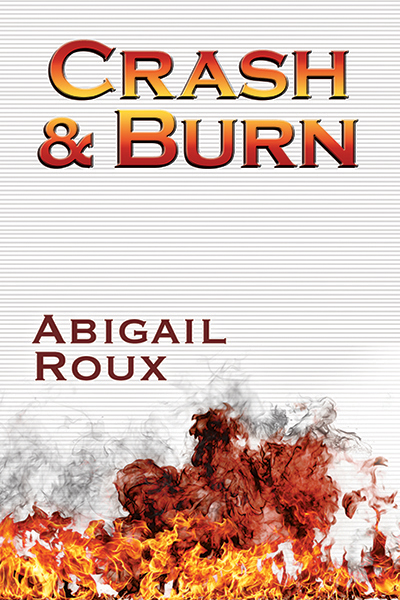 Every so often, I’ve been lucky enough to find a book, author, or series that gets so far under my skin and into my heart that I can’t imagine how I ever existed without it/them. These stories are the ones I purchase in paperback or hard cover (if available) as well as digital. They’re the ones that are given places of prominence and permanence on the bookshelves around my desk, so that they’ll be handy when I need to feel closer to the characters for some reason or relive a particular scene. The ones it’s completely okay, and sometimes necessary, to lose sleep over. The Cut & Run series by Abigail Roux has been among the foremost of that group of books since it was first suggested to me several years ago. The final book in the series, Crash & Burn, reinforces each one of the reasons for that opinion all over again and then some.

In the interest of trying not to ruin the story, this review will be as spoiler-free as possible. Crash & Burn covers a tremendous amount of ground, tying up loose ends and answering questions that have been building throughout the series. While there was a great deal of clarity provided during the course of the narrative, I was utterly blindsided by other revelations (a fact that already has me twitchy to reread the entire series from the beginning with this new perspective). I believe it is a testament to the author’s abilities that, after nine books and multiple rereads of each, I was still caught unaware by some of the events that unfolded.

Ms. Roux is an excellent writer. Ty and Zane’s world is a dangerous one, and anyone who follows the series will likely expect that the shifting from light to darkness and back again will sometimes be extreme and often difficult. Ms. Roux has long demonstrated a knack for torturing her readers by torturing her characters, and spared no one in this latest story. It was both unbearable and glorious, all at once.

Although Ty and Zane have been striving for a solid and contented future together for a good while now, they seem more complex and vibrant to me than ever here, time and circumstance having shaped them into two sides of a blade that’s been perfectly honed, rather than a surface worn smooth. Their journey has been anything but the latter. Still, despite the battles they face in Crash & Burn, Ty and Zane manage to share moments of brutal and voracious intimacy, as well as sweeter interludes that are achingly tender. They have scrapped and clawed for every bit of happiness they have, and never more so than in this story. I can’t think of a pairing in the genre that deserves it more.

Crash & Burn was a treat in other ways, as well, particularly because of all the other characters who returned to play a part in the narrative. There were quite a few surprise appearances, either by mention or participation, which I was extremely happy to see. Though it was wonderful to touch base with all of them, I admit that I do have my favorites. Not to discount any of the other remarkable characters Ms. Roux has created, but Mara and Chester Grady get a special recognition here for their consistently enjoyable presence throughout much of the series. I love Mara Grady. Chester, too. Love them. I’d also pay good money for a transcript of the first few discussions between Mara and Beverly that were referenced a little later in the story.

With Crash & Burn, the Cut & Run series has come to an end. And, yes, I cried. This series has simply meant something different to me than many others have. Something more. In addition to the books themselves, Ms. Roux’s generosity with her characters, time, and self throughout has been a unique and rare gift. Ty and Zane deserve their happy ending, and I don’t see how it could have been done any better than it was in Crash & Burn. This story hurt in places. Terribly so. But, it was also thrilling, and funny, and absolutely lovely in all the right ways, too. I can’t possibly ask for more than that. The space that Ty and Zane have claimed in my heart and soul will always be theirs.

In closing, I’d like to say a personal thank you to Ms. Roux for a world I’ve loved getting lost in, for characters who stayed with me long after the last page of every book, for two of the best heroes to ever come to life through words, and for what is one of the finest and most extraordinary series I’ve had the pleasure to read.

It’s been five years since Special Agents Ty Grady and Zane Garrett first worked together to solve the Tri-State murders, and time has been both harsh and kind. Engaged now, they face the challenge of planning a deeply uncertain future together. Zane is at the pinnacle of his career with one last mystery to solve, while Ty is at sea in a world where he’s no longer the tip of a spear.

There’s just one more hurdle in the way of their happy ever after: a traitor from their inner circle who threatens to burn their world to the ground.

Squeezed between the Vega cartel, an unknown mole, and too many alphabet agencies to count, Ty and Zane must gather all their strength and resources to beat the longest odds they’ve ever faced. To make it out alive, they’ll need help from every friend they’ve got. Even the friends who might betray their trust.

Abigail Roux was born and raised in North Carolina. A past volleyball star who specializes in sarcasm and painful historical accuracy, she currently spends her time coaching high school volleyball and investigating the mysteries of single motherhood. Any spare time is spent living and dying with every Atlanta Braves and Carolina Panthers game of the year.

Abigail has a daughter, Little Roux, who is the light of her life, a boxer, four rescued cats who play an ongoing live-action variation of Call of Duty throughout the house, a certifiable extended family down the road, and a cast of thousands in her head.

Follow this link to find detailed info on the go-bag prizes, but make sure you comment here to enter!

Thanks for stopping by! You can follow the entire tour by going to Riptide Publishing.