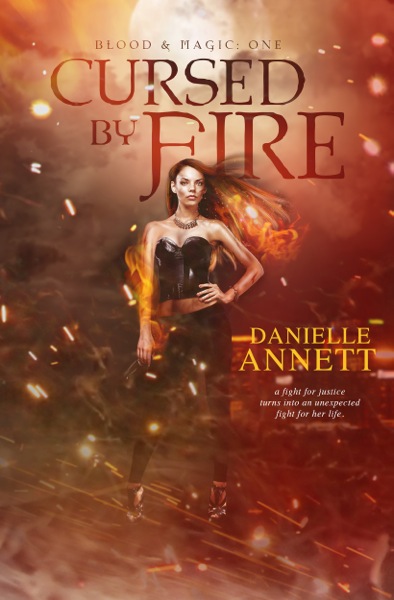 It has been six years since the Awakening and peace in Spokane, Washington is still tenuous at best. The vampires and shifters are all vying for control of the city and the humans seem to be the ones suffering the consequences, or so it seems.

Aria Naveed has spent the last two years of her life fighting to make the many wrongs of the world right, but soon finds out that the humans aren’t as weak as they appear and may be a more terrifying foe than any of the other races combined.

When a stranger rolls into town with trouble on his heels, Aria finds herself trapped in the middle of a battle that could cost her more than she has bargained for as a fight for justice turns into an unexpected fight for her life.

Behind the scenes look at how Cursed by Fire’s cover came to be:

Danielle Annett is a reader, writer, photographer, and the blogger behind Coffee and Characters. Born in the SF Bay area, she now resides in Spokane, WA, the primary location for her Blood & Magic series.

Addicted to coffee at an early age, she spends her restless nights putting pen to paper as she tries to get all of the stories out of her head before the dogs wake up the rest of the house and vye for her attention.

The light began to fade from his eyes as I crawled across the floor in an effort to reach my father. My nails were raw and bloody as I struggled to carry myself closer to him, digging into the rough wooden floors with each drag of my body.

I woke gasping for breath, drenched in a cold sweat, clutching the hilt of my dagger as if my life depended on it. I frantically looked around the room in search of our attacker while also taking stock of any injuries. I was perfectly whole.

“It was just a nightmare,” I told myself, though that did little to ease the ache in my chest over the remembered pain. I miss you so much.

Rubbing my hands over my face, I pushed back the wet, loose tendrils of hair that had escaped my braid during my fitful rest and returned my dagger to its resting place beneath my pillow. Taking another deep breath I registered a hint of smoke.

My eyes roamed over the room, frantically looking for the source of fire.

“You have got to be kidding me!” 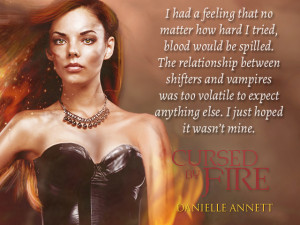 I untangled my body from the sheets, tripping and falling into a heap on the floor before I was able to crawl out of my covers and retrieve an old shirt. I frenziedly swatted at the bedroom curtains with the old t-shirt but the flames continued to rise. Deciding there was no other choice, I ripped the curtains from the window and rushed to the kitchen.

Throwing the curtains into the sink and turning the faucet on all the way, I watched as the flames were snuffed and steam began to rise. The curtains ruined.

Turning the water off, I allowed my body to slide down the smooth wooden cabinets until my bottom met the cool tile floor. I folded my arms across my knees and rested my forehead against them. Closing my eyes I took several deep breaths, my heart still racing from the effects of the recurring nightmare. This was getting out of hand. I had thought the nightmares were fading, but something was bringing the memories back with a screaming vengeance and this was the third time this week they’d plagued me. I missed my parents but it’d been over six years now. They weren’t coming back and I needed to let it go. My subconscious needed to let it go and I needed to let Daniel’s death go. Not the case, no, I wouldn’t let that go. But his death was affecting me in ways I couldn’t allow to continue.

I breathed deeply in an effort to calm my nerves. Small tremors racked my body, the nightmare had shaken me more that I’d like to admit. My skin was covered in a fine sheen of sweat. A physical reminder that I needed to relax before I accidentally caught something else on fire.

Danielle is giving away some great prizes during the blog tour. To enter, please fill out the Rafflecopter form follow the directions. The giveaway is open during the time specified on the Rafflecopter form. Winner(s) chosen at random from all eligible entries. Open to participants, 18 years or older, who are legally allowed to participate in such a contest as allowed by their local laws. All federal, state, local, and municipal laws and regulations apply. Void where prohibited. No purchase necessary. By participating in the contest, participants agree to be bound by the decisions of the contest sponsor. Prize will be delivered by the author. This blog, its reviewers, and the owner are not responsible for items lost in the mail. By entering this giveaway, participants agree to abide by these terms.

One response to “Blog Tour + Giveaway: Cursed by Fire by Danielle Annett”