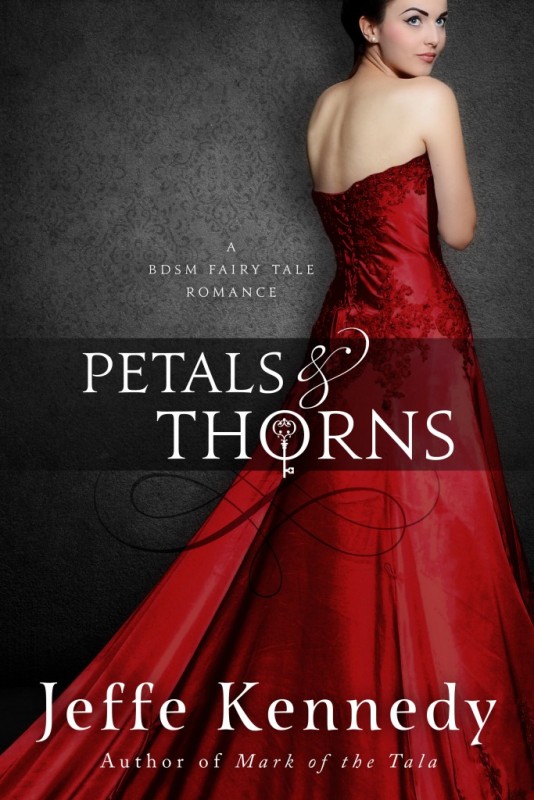 In exchange for her father’s life, Amarantha agrees to marry the dreadful Beast and be his wife for seven days. Though the Beast cannot take Amarantha’s virginity unless she begs him to, he can and does take her in every other way. From the moment they are alone together, the Beast relentlessly strips Amarantha of all her resistance.

If Amarantha can resist her cloaked and terrifying husband, she gains his entire fortune and will be allowed to return to her family and a normal life. But the Beast seduces her at every turn, exposing, binding, tormenting, and pleasuring Amarantha until she no longer knows her own deepest desires. Increasingly desperate to break the curse that chains his humanity, the Beast drives Amarantha past every boundary. But her desire for a normal life may jeopardize the love that will save them both.

Jeffe is giving away a digital copy of Petals and Thorns to four (4) lucky winners tour-wide. To enter, please fill out the Rafflecopter form and follow the directions. The giveaway is open during the time specified on the Rafflecopter form. Winner(s) chosen at random from all eligible entries. This contest is open internationally where not prohibited by law. Open to participants, 18 years or older, who are legally allowed to participate in such a contest as allowed by their local laws. All federal, state, local, and municipal laws and regulations apply. Void where prohibited. No purchase necessary. By participating in the contest, participants agree to be bound by the decisions of the contest sponsor. Prize will be delivered by the author. This blog, its reviewers, and the owner are not responsible for items lost in the mail. By entering this giveaway, participants agree to abide by these terms.

4 responses to “Cover Reveal: Petals and Thorns by Jeffe Kennedy”