Welcome to our weekly feature that focuses on audiobooks. It’s time to…

Audiobook review: No Matter What 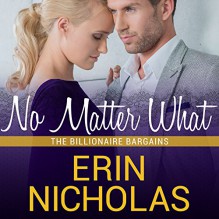 No Matter What is the short and sweet story of Jaden and Adam.  Though it was somewhat of a whirlwind romance and a slightly clichéd love story, it was an enjoyable listen.

First, let me say that overall, I did like Jaden and Adam’s journey.  I really like them as characters.  Though I enjoyed Jaden’s mental struggle between her attraction to Adam and her strive to be professional, I did find it funny that the temptation of Adam usually won.  Every time she got herself under control and walked away…she just couldn’t resist him.  Adam was more interesting.  I found it odd that he had no problem hiring Jaden and immediately succumbing to his attraction to her by flirting.  Since he was so concerned and overbearing about his daughter and her well being, I was surprised he thought he could just have both; Jaden the lover and Jaden the physical therapist for his daughter.

I liked how time passed between the interludes of unprofessional flirting, giving them time to get to know each other and think about the situation.  However, it was a bit of a whirlwind romance.  But for those that enjoy a contemporary that indulges a hopeless romantic fantasy, this is entirely up your alley!  As we approached the end, however, I was surprised by the seemly abrupt twist that pulled them apart as well as how they reunited.  I really loved how the story ended.  Absolutely loved it!

I liked Rebecca Estrella’s narration overall.  Though her voice differentiation wasn’t as strong between the male characters and female characters, I was able to follow the story for the most part.  There were only a couple of instances where I had difficulty discerning who was speaking.  Since I was listening via iTunes and I couldn’t figure out how to tell my phone it was not “music” but an audiobook, I was unable to alter the listening speed.  I might have enjoyed it more if it had been pushed up to 1.25x, which seems to be my usual listening pace.

Though No Matter What was a fairly simple and somewhat straightforward contemporary romance, I liked the story of Jaden and Adam.  The romance had a strong initial attraction and then allowed time to build up the romance.  I was a little put off by the early flirting that seemed very unprofessional.  Yet, the conflict that came between them, however, felt very real and surprised me.  I knew something had to happen and though it was abrupt, I enjoyed watching the aftermath and the eventual reconciliation.  The narration by Rebecca Estrella I found to be pleasant.

The best doesn’t come cheap…and this time it could cost him his heart.

Handsome billionaire Adam Steele is good. Good at getting his way. If nothing else, money always works—until he realizes he can’t buy his daughter’s way out of her new wheelchair. Three private physical therapists later, he’s almost given up on Emily walking again. Then he meets Dr. Jaden Monroe. And his match.

Feisty physical therapist Jaden Monroe has never met a man quite like Adam. She’s not sure if it’s his I’m-in-charge attitude or the heat in his eyes when he looks at her, but she finds herself wanting to say yes to anything he asks. Like when he asks her to help his daughter walk again. Of course, the million dollars he offers—just enough to finish the pediatric rehab wing Jaden has been working for and dreaming of—is hard to say no to as well.

But Jaden didn’t anticipate a teen whose injuries are more than physical. Or a man so passionate and devoted—and as tenacious as she is. As she and Adam fight their attraction, the only thing harder than keeping her promise will be keeping a hold on her heart.

3 responses to “Listen Up! Audiobook Review: No Matter What by Erin Nicholas”