Audiobook review: The Mark of the Tala 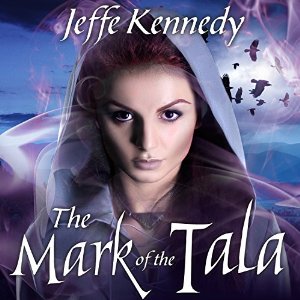 Andi never felt like she fit in. She is not as beautiful and kind as her younger sister Amelia, nor as cunning and intelligent as her older sister and heir to the throne, Ursula. She takes refuge in riding her horse far and wide to escape the stares at court and hide from the pity she sees in their eyes. Then everything changes the day she meets a dark stranger in a far away meadow. With one kiss Rayfe unravels Andi’s life, exposing all that she holds kind and true to be a lie.

Right from the beginning, The Mark of the Tala grabbed my attention, and I found myself fully entangled in its unique mythology and fascinating tale. I loved that the story is shared solely from the point of view of Andromeda, aka Andi, the middle daughter of High King Uorsin. Through her eyes, heart, and mind, we are witness to her transformation from the least favored daughter to a mighty woman. At first, I simply wanted to find out more about Andi, but then I was on edge as her destiny began to unfold.

As her promised betrothed, Rayfe is a terrifying enigma to Andi. She is both scared of, yet drawn to, his darkness. I adored how Rayfe and Andi grow and change both individually and as a pair. While his motives are selfish, he too learns to love. The pair have great chemistry, and I felt their relationship developed at a fitting pace. The mystery of the Tala people is fascinating and exciting.

Generally, the narration by Cris Dukehart is well-suited to the feel of the story. She keeps a prim and proper edge to both the dialogue and narration, which is appropriate considering the period and setting of the tale. I preferred her female voices, especially those of Andi and her sisters, but I found her performance of Rayfe and his advisor a bit off. However, in time I grew used to Rayfe’s voice and eventually even liked it.

Overall, The Mark of the Tala is a wonderful fantasy romance. Ms. Kennedy has created an interesting mythology in a wonderful world. I enjoyed Andi’s progression from invisible and ignored middle daughter to confident and in-control woman. Although the book is its own story, there is much left to tell, and there are some major issues that need to be resolved. I was completely wrapped up in Andi’s journey, and as she came to love Rayfe, so did I. I look forward to reading the continuing tales of the Twelve Kingdoms.

Story: A- Enjoyed A Lot
Narration: B, Liked It

6 responses to “Listen Up! Audiobook Review: The Mark of the Tala by Jeffe Kennedy”