Thank you for joining us as we help celebrate the release of Dark Heir by Faith Hunter. On today’s blog tour stop, we have B.’s review, followed by an exclusive excerpt from Dark Heir. To read more excerpts and reviews, be sure to follow along on all the tour stops. 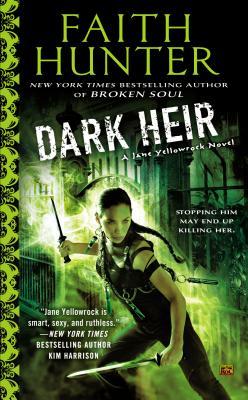 Jane Yellowrock is back in Dark Heir, the ninth book in the Jane Yellowrock series. Although Jane is still dealing primarily with vampire politics and the resulting fallout, she’s grown and evolved a great deal and is finally able to accept that she isn’t nearly as alone as she always thought she was. With her two business partners and friends, the Younger brothers, and a few other allies on her side, Jane has become a smarter, stronger version of herself. Which is a very good thing, if she intends to remain capable of fighting the seemingly endless battles that her affiliation with the supernatural elements of the series brings to her doorstep.

As has been proven repeatedly in this series, the vampire world is bafflingly frustrating in many ways. While it was a relief to see that Leo Pellisier, the MOC of New Orleans, wasn’t quite as treacherous has he has been in the past, it wasn’t clear whether he was going to try to kill Jane or merely converse with her on several occasions–an unfortunate standard for him, as of late. The overall chaos that seems to be a mainstay of vampire existence continues to worsen in Dark Heir, however, the intrigue and machinations set in motion by the (nearly) immortal Mithrans playing out in a chain of inevitable consequences. Arrogance, greed, and longevity are clearly a very bad mix in Jane’s world, and most of the vampires are guilty of all three.

I’ve always liked Jane, and felt that she was a unique and strong presence in the genre, but I’ve come to appreciate her more and more as this series progresses. Now that she is moving past a lot of her “I am an island”/”living on borrowed time” point of view, she’s become a richer, deeper character, a development that has added much to the series as a whole. I don’t think I’ve seen Jane as capable as she is in Dark Heir, or as vulnerable. But, Jane isn’t naïve, nor is she the callous assassin she might have been. Opening herself up to others is a risk, but one she’s now willing to take, and, so far, the benefits have made her exceptional.

There’s one particular development over the past couple of books that has been as amusing as it is endearing: Jane has been introduced to real romance. Even with the rough patches they’ve had, and still may have, to work through, Bruiser seems perfect for Jane. He is respectful of Jane’s opinions and abilities, and readily accepts her dual nature. Even during their most intimate moments, he is patient and reigned in, waiting for Jane’s own desire to draw her to him. At the same time, now that she’s acknowledged what he is to her on some level, he doesn’t hesitate to reassert the intimacy between them. Once he’s done so, however, he waits for her to want him back, making no assumption of the privileges he’s been granted previously. Rather, he earns them again. It’s an interesting dance they have going, and I’m eager to see where it takes them.

The only thing I had trouble with was keeping all the various factions straight during the course of the story. The different groups that affect Jane’s life have been drawing closer together, sometimes overlapping, and the shift from friend to enemy and back can happen so fast that, occasionally, I had to do a quick reread of a particular section to make sure I’d gotten it right. I don’t mind doing so, though, and chalk it up to the clever intricacies Ms. Hunter has woven throughout the series.

Reading the Jane Yellowrock books has been a wonderful experience so far, even if each time Jane is at a crossroads, my stomach still gets tied up in knots. Like any good hero, Jane has made mistakes, some of which have had terrible and long-reaching consequences. But, Jane has learned a great deal—about the world she lives in, as well as herself. After everything she’s been through, she has found a family to claim as her own, and maybe even someone to love. Hope is a new possibility for Jane, but she’s wearing it well. I like believing in Jane, and would love to see more from her in the future.

For centuries, the extremely powerful and ruthless vampire witches of the European Council have wandered the Earth, controlling governments, fostering war, creating political conflict, and often leaving absolute destruction in their wake. One of the strongest of them is set to create some havoc in the city of New Orleans, and it’s definitely personal.

Jane is tasked with tracking him down. With the help of a tech wiz and an ex-Army ranger, her partners in Yellowrock Securities, she’ll have to put everything on the line, and hope it’s enough. Things are about to get real hard in the Big Easy.

We finally got to the house and Eli parked on the street, the rain still tapping down in a light shower. Oddly, I was sorry the ride was over. It had been nice. Stress-free. Vamp-free. Eli opened my door for me and stood there, in the pattering rain, waiting. I watched him. He looked kinda odd, and I asked, “What’s wrong, Eli?”

“I dunno. You’ve been rubbing your arm for the last few hours.” He leaned into the SUV. “You have tear stains on your face. You’ve been . . . crying?”

He said that like I never cried. I cried. I cried any time I needed to. I pulled up my sleeve and extended my arm. “I think I’m hurt.”

Eli paled. I made a face, swung my legs over from the floorboard to the street, and started to stand. My knees buckled. Eli caught me, sliding his arms under my legs and around my back, lifting me from the SUV. The jolt drew out a gasp, and I cradled my hurt arm across my chest. Eli kicked the door shut with a foot. “Let’s get you inside and check you out. I have a feeling you need to change into your mountain lion form. Fast.” I didn’t reply, and Eli carried me into the house.

At his desk, Alex was rolling back and forth in his new desk chair, with the energy drink cans in a different formation at his feet. “You two get married?” he quipped.

“No. Something’s wrong with Janie.” 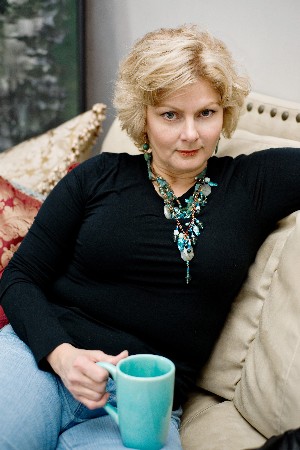 New York Times Bestselling author Faith Hunter writes fantasy in several subgenres: the urban fantasy Skinwalker series, featuring Jane Yellowrock, a Cherokee skinwalker; the post-apocalyptic Rogue Mage series and RPG, featuring Thorn St. Croix, a stone mage; and the upcoming SoulWood trilogy featuring Nell Nicholson Ingram, a woman who can siphon off the magic of others and is drawn into solving paranormal crimes. Faith writes mystery and thrillers under the name Gwen Hunter. When she isn’t writing, Faith likes to make jewelry, run whitewater rivers (Class II and III), and RV with her hubby and their rescued dogs.