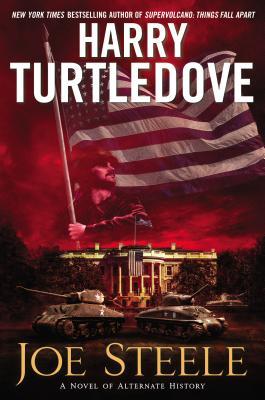 Josef Vissarionovich Djugashvili was born in the Soviet Union in 1878.  When he was in his 30s, he took the name Stalin from the Russian for “man of steel.”  What if Joseph Stalin’s parents had immigrated to the United States before he was born, making him a full citizen and eligible, like any other American-born citizen, to run for president?  Joe Steele is author Harry Turtledove’s game of “what if” Stalin were in the White House?

The average reader with a cursory memory of high school history will be able to follow the alterations to our present timeline.  I did feel compelled, however, to look up certain facts to remind myself of what was factual and what was fictional, like John Nance Garner as the presidential running-mate.

The story alternates between the experiences of two brothers, Mike and Charlie Sullivan.  Both are seasoned reporters, working as Associated Press stringers.  The story really begins as both cover the 1932 Democratic Convention where Roosevelt is expected to take the nomination until the New York Governor’s mansion burns down with him and his wife Eleanor still inside.  Still feeling the effects of the Depression, probably anyone could have won against Hoover.  Steele takes the nomination and the election, but there is some question as to who was responsible for the mansion fire.  It is from here that the brothers’ lives split.  Charlie is inclined to give Steele the benefit of the doubt even though he questions Steele’s methods and sincerity.  Mike doesn’t hold back, going after the Steele for obvious criminal activity and walking all over the Constitution.  Their lives couldn’t be more different after Mike ends up in a forced labor camp as retaliation by the administration for a particularly poignant article spotlighting Steele’s crimes. Already by his second term, the First Amendment means nothing.  Neither brother is an especially interesting character or accomplishes much in the story.  In fact, despite heinous events, I felt like the story was being reported to me.  I didn’t feel a part of it or inside it in anyway.  It felt like a simple accounting of events.

I was ready to mess with history, but unfortunately, I had an issue with the premise right from the start.  In the age of modern technology, it’s hard to believe anyone in this country would be gullible enough to believe that The Mercury Theater’s radio production of H.G. Well’s War of the Worlds was an actual news report, but it did produce mass hysteria.  It’s perhaps less difficult to imagine a national climate that was so fearful as to produce MacCarthyism.  Acknowledging that both are facts of our history, that we are capable of acting irrationally out of fear, and even taking in Joe Steele’s criminal activity into consideration, I do not believe the American public would have put up with Steele’s form of socialism for long, let alone the six virtually uncontested terms put forth in the book.  Further, I don’t believe that the little boy born and raised in California would have been the same little boy born and raised in the Soviet Union of the 19th century.  You can argue nature vs. nurture, but he might not have even gone into politics after wandering in warm sunny fields, walking on the beach, and enjoying freedom in a state with a reputation for rebelling against being told what to do. In my mind, it’s just not the place that spawns a dictator.  So it was just too much disbelief for me to suspend while exploring what the country would have looked like under his reign.

Overall, Joe Steele didn’t know if it wanted to be a political commentary or a war story.  There was actually very little of Joe Steele as a character and more of him as a presence.  We spent a lot of time with his aids and in Japan fighting a war with Trotsky.  There were also incongruities with technology that was advanced that wouldn’t have come to be after so many of the innovators of that time were shunted to Steele’s gulags or simply executed.  Ultimately I was unhappy with the ending.  It didn’t have to end the way it did and overall, the book didn’t seem worthy of an award winning author.

President Herbert Hoover has failed America. The Great Depression that rose from the ashes of the 1929 stock market crash still casts its dark shadow over the country. Despairing and desperate, the American people hope one of the potential Democratic candidates—New York governor Franklin D. Roosevelt and California congressman Joe Steele—can get the nation on the road to recovery.

But fate snatches away one hope when a mansion fire claims the life of Roosevelt, leaving the Democratic party little choice but to nominate Steele, son of a Russian immigrant laborer who identifies more with the common man than with Washington D.C.’s wealthy power brokers.

Achieving a landslide victory, President Joe Steele wastes no time pushing through Congress reforms that put citizens back to work. Anyone who gets in his way is getting in the way of America, and that includes the highest in the land. Joe Steele’s critics may believe the government is gaining too much control, but they tend to find themselves in work camps if they make too much noise about it. And most people welcome strong leadership, full employment, and an absence of complaining from the newspapers—especially as Hitler and Trotsky begin the kind of posturing that seems sure to drag America into war. 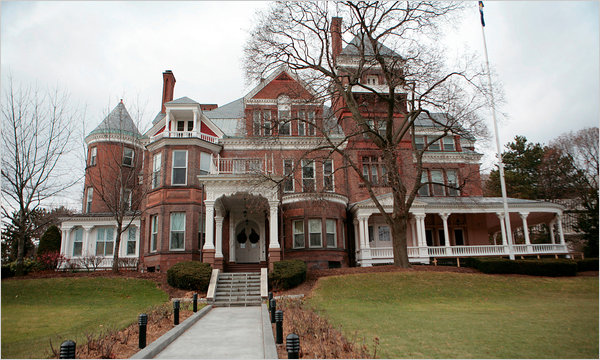 Not to worry, the beautiful governor’s mansion is still standing proud. After a fire in 1961 the possibility of building or purchasing a newer mansion uptown was considered, but Governor Nelson Rockefeller fought for restoration and was instrumental in getting the mansion named to the National Register of Historic Places.  Most modern governors have chosen to remain in their own modern dwellings and use the mansion for ceremonial events.