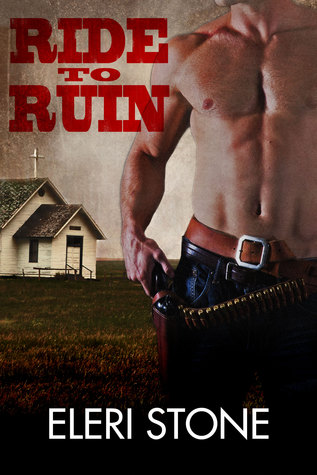 Ellie’s mother died in a Reaper attack ten years ago, leaving behind Ellie and her younger sister Lu. Now Ellie is living day-to-day, sharing duties and a bed with Dan, but not all that happy with life. When Ellie finds out Lu is wanted for murder, she finally discovers Dan’s true selfish nature. Packing up and heading out to save her sister, Ellie leaves Dan behind.

Ranger Garrett Landry is on temporary leave of duties while he tries to locate and save his mom and sister from a cult-like preacher, Blackwell. Since finding both Lu and Garrett’s family are along the same path to Ruin, Garrett and Ellie partner up to make the difficult journey. Along the way, the get help from Lu’s best friend Molly and a known smuggler, Flynn (FYI: Flynn & Molly are the main characters in their own, free online story!)

Ride to Ruin, the third title in Ms. Stone’s unique Reaper series, is highly entertaining and a delightful romance. The series is based on an alternate version of Earth, where the Reaper virus, which changes infected men into crazed, flesh-eating monsters, impacted how society developed, with the rich living in the mountains, and the rest living on the frontier, creating a “western” feel for the setting. The border towns are protected by Rangers, men (and a few women) who are immune to the Reaper virus. While reading the first two books in the series is not needed to enjoy Ride to Ruin, it helps put the story into context within its world and the dangers it holds. However, this time around, the story puts most of its energy into and focus on the romance and characters, with hardly any page time for Reapers, the cure, and all of the political issues surrounding the Rangers. I greatly enjoyed this difference and the associated devotion of time spent on the main couple. I felt the story flowed more smoothly overall, and while I wondered what was happening in the political arena, I never missed it.

I adored both Ellie and Garrett, especially as a romantic couple. They start off as partners, with both mutual distrust and respect, helping them create a strong foundation based on equality. This is something Ellie was missing with Dan, and she recognized the differences, helping her to trust and fall in love with Garrett. Their banter was light and fun, yet perfect for developing a solid relationship. However, their journey isn’t all smooth trails, for which I am thankful. The bumps in the road give the couple depth and create emotional connections.

The primary story of saving Lu and getting into Ruin to rescue Garrett’s family is exciting. My heart actually raced as they made their way into the heart of Blackwell’s territory. Although I had a minor issue with a couple of incidents that lead up to the climax, they did nothing to impact my overall enjoyment of the story.

Overall, I really enjoyed Ride to Ruin and appreciated how ending was fitting for Garrett and Ellie’s love. Keeping the focus on finding Lu and rescuing those in Ruin, while allowing love to develop from a true partnership, created a tighter, more enjoyable story than in the previous book. Ellie and Garrett are a great pair both in and out of the bed, and their romance and chemistry are steamy and playful. Since much of the book is outside of the existing political climate, it can be read standalone, and I strongly recommend the book to fans of both paranormal and western/historical romances.

When a religious sect settles north of Fort Dougan in an abandoned city called Ruin, it doesn’t take long for stories to spread that something’s not right about the place. Charismatic preacher Thaddeus Blackwell has promised his flock a better life, unsullied by the decadence of Scraper society and the immorality of life on the border. With an army of cured Reapers under his command, Blackwell is determined to build a godly society…even if he has to use ungodly means to do it.

Working the ranch with the horses she loves, Ellie hasn’t paid much attention to the rumors about Ruin until her sister is charged with Blackwell’s murder. Ellie drops everything to ride to Lu’s aid only to find that her sister has fled town with a Ranger hot on her trail and Thaddeus’s son, Mordecai, out for her blood.

Ranger Garrett Landry believes Lu is the key to getting his family out of Ruin alive, and he needs to find her before Mordecai gets to her. Reluctantly accepting Ellie as his partner in the search, Garrett doesn’t expect to fall in love with the brave but in over her head rancher. And he never imagines that Ellie might be the one to save him instead.

4 responses to “Review: Ride to Ruin by Eleri Stone”