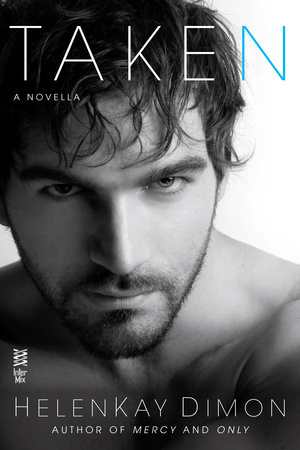 Not gonna lie. When I read HelenKay Dimon’s first Holton Woods book, I was clamoring for more of Eli and Wade’s story. Fortunately, Ms. Dimon was given the go-ahead and got this hot little M/M story in our hands. Never read a M/M romance? This *might* be a good gateway story for you!

My only complaint about Taken was that it wasn’t long enough. At an estimated 119 pages (only available in e-book, as far as I could tell…), I devoured this title in an evening while I was resetting from an unbearable day at my #dayjob. Luckily, Taken was just what I needed. M/M romances are a little different from the usual M/F fare. I think they’re more intense, and get straight to the issues, oftentimes creating deep characters and intense emotions. I like to read M/M stories when I’m frustrated myself, because it gives me an intense fictional outlet for my own emotions which, if I think about it, are really superficial compared to the intensity of emotion from most characters.

Wade, a staple through the Holton Woods series, finally gets a moment to tell his story—and what we resoundingly hear is that Wade is miserable without Eli. They’ve got this on/off relationship going, complete with hot sex and undeniable chemistry. What makes me cheer for Wade (most of the time…) is that he feels so deeply for Eli, and it’s an unknown for him. I think many readers can relate—that rush when your other half walks into the room, the intensity of attraction, and wondering whether it’s just a serious case of lust or whether it’s the real deal.

Eli, damaged and broken by circumstance, has led a life of duplicity. He’s vowed to ‘go straight’ because the CIA lifestyle isn’t for him. When several someones from Eli’s past show up, the pull to his past life is undeniable, but manageable. Because in his heart, he knows what he really needs, and it’s Wade.

The two engage in a complicated dance, trying to determine whether they’ll be able to meet the needs of the other. And. It’s. Hot. *fans self* In the midst of working out all the kinks in Wade and Eli’s relationship, Ms. Dimon completely sets up her next title in this series, Mine, scheduled for release October 2015. I do believe it’s essential to read the Holton Woods titles in order. The plotlines build upon previous titles, and knowing the characters ahead of time definitely gives the reader an advantage. However, I think Taken is a great gateway for M/M romance for any reader, and would probably cause a backlist binge for readers unfamiliar with the series…this title doesn’t give away too much of the plot from other titles, but will definitely pique the curiosity of readers. A.K.A., buy everything to-date and read in order. The reveals of different plot points by Ms. Dimon is nothing less than fabulously orchestrated.

Wade Royer and Elijah Sterling are on shaky ground. While initially reluctant Eli is finally ready to take things to the next level, Wade is hesitant. He senses trouble coming and he’s right. Still, they know their fiercely undeniable connection—both in and out of the bedroom—is worth saving.

Then a man from Eli’s past reappears and the CIA comes calling—and they both want Eli back. With their relationship in jeopardy of falling apart and Eli in danger of a different kind, both men will have to decide what they really want—and then take it…