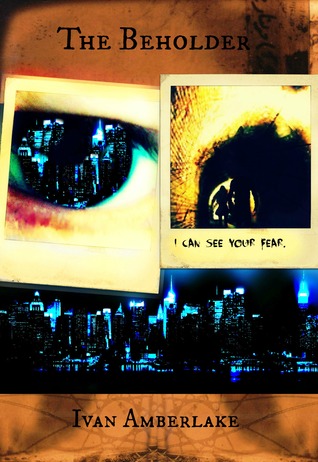 The first in a new self-titled series, The Beholder is an interesting mix of action and drama set in an alternate world.  I found the mythology fascinating, though a bit confusing, and the plight of the hero gripping, though I felt an emotional disconnect with him.

This book really threw me for a loop.  It is not often I can feel so conflicted about how I want to rate a novel.  But The Beholder has me a bit knotted.  Overall, I really did like the novel.  The action and plight of keeping Jason and his friends (Matt and Debbie) safe was gripping.  I enjoyed the fight sequences and the awe of the battles between the Lightsighted and Darksighted.  The hints that Jason should not trust easily, that maybe those trying to help him were actually leading him to his end. It was tension-filled up unto the very end.

The mythology was really interesting and very different from anything I have read before.  It is as if there is a secret society hidden from the Unsighted, those that cannot see Energy and are kept ignorant of it.  Sighted are those that can see Energy and are split into two groups: Light and Dark.  Obviously, Darksighted are those that are, for all intents and purposes, evil.  They seem to desire to take over and rule the world, while the Lightsighted want to keep the Sighted hidden from the Unsighted as well as maintain a balance between good and evil.  The Sighted can utilize Energy in ways that would appear to the Unsighted as if they wield magic or have special powers.  Although it seems like easy concepts to understand, it was very complicated at times.  There was quite a bit to learn about and the science was staggering.  These moments made the novel drag a bit, but since Jason was trying to understand a world he had been kept hidden from, it was a great way to convey the mythology while allowing the story soldier on.

I’m not sure if it was the world-building that dulled me in some way or the love at first sight element that disconnected me from Jason.  It was during lulls between the action sequences when Jason was learning about the world at the same time falling in love with Emily.  Sadly, I just didn’t feel the emotions that formed between Jason and Emily.  Nor did I feel the emotional connection between Matt, Debbie and Jason.  For some reason through the novel, I didn’t develop a strong emotional attachment to any of the characters.  I liked them and cared for them, even felt a tinge of worry, but I wasn’t consumed by emotion over their plight.  I was more caught up in the mystery and tension of the looming big battle and whether Jason’s beholder powers would manifest.  It was the thought of one of the good guys being a possible traitor, or that Jason had actually been taken in by the wrong side that kept me glued to the pages.

Though I had only a superficial emotional connection to the characters, I still liked The Beholder.  The mythology, though a bit confusing, was fresh and fascinating, and I enjoyed the conflict and strife between the opposing sides.  I am interested in reading the next book in The Beholder series to see what happens next to Jason.  The way the novel ended has me wondering if anything is as it appears.

Around the world, people die under mysterious circumstances. Each has a sign. Each is a piece of a jigsaw puzzle. A NYC interior designer Jason Walker receives a message saying he is the final piece.

Emily Ethan, a startling beauty with supernatural powers, appears and tells Jason that powers dormant within him are about to wake. He is the only person who can prevent darkness from enslaving the world. He is the Beholder whose advent has been awaited for many years.

Setting out on a journey with Emily, Jason discovers the world he could have never imagined, but the greatest surprise arrives the moment he realizes he has fallen in love with Emily.

4 responses to “Review: The Beholder by Ivan Amberlake”