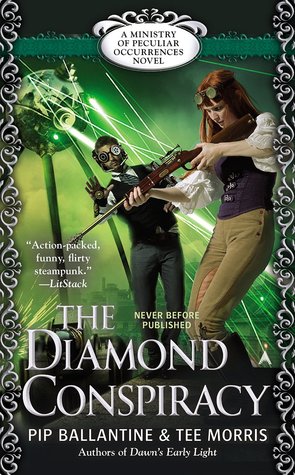 Note: this review mentions events from previous books, therefore may be spoilerish if you haven’t read the earlier titles.

Having just barely escaped their adventures in America, Eliza Braun and Wellington Books are heading back home to the British Empire, taking their time to consummate their newly formed romantic relationship. However, back home, Eliza’s foster children, known as the Ministry Seven, uncover a monstrous plot against the Queen, putting themselves and housekeeper Alice in parlous danger. Books and Braun cut their trip short, racing back to meet up with Alice and the children, only to find out that the Ministry of Peculiar Occurrences is being hunted down by the Department of Imperial Inconveniences on orders of the Queen. Now its up to Books and Braun to save themselves, their family, and the Empire itself!

The Diamond Conspiracy is another exciting adventure from the Ministry of Peculiar Occurrences. Building upon the solid foundation laid in the previous three titles, Books and Braun are finally partners in all its meaning – growing into the dynamic duo I knew they could be. Their relationship is well played within the setting of the story, enhancing their working partnership while not creating unnecessary drama. It humanizes both Books and Braun, making them more relatable. That part of the story was absolutely perfect.

The unfolding plot against the Queen and country is terribly engrossing and filled with twists and turns that I didn’t see coming. The not-so-mysterious-any-longer Maestro remains as the central bad guy, while his sanity continues to decline in its downward spiral, allowing an additional key figure to take charge. I adore the inclusion of several historical and literary figures as key players in the plot, one of which truly caught me off guard. However, the authors rely on the reader’s existing knowledge of these characters, so if you are unfamiliar, you may miss out on some of the implied understanding. I feel this also lead to a lack of physical descriptions of some of the tech and war machines, making it difficult for me to picture some of the events in my mind.

While Books and Braun work to save the Empire, we have the opportunity to finally learn more about Wellington’s upbringing, specifically his father, who has always haunted Books. And with how things were left by the end of the book, it is clear that there is much left for Books to uncover about his own past. The events in The Diamond Conspiracy end one overall storyline, while beginning another.

The Ministry of Peculiar Occurrences series is one of my favorites – filled with fantastical adventure, devious plots, clever mysteries, and interesting characters. Each book builds upon the previous, allowing for deeper stories and connections. The Diamond Conspiracy is an excellent addition to the series, providing some wrap-up to lingering plots. The story flows smoothly, even with the shocking twists. It is an enjoyable journey and fun story, with few surprises that made me smile. I look forward to discovering what the future holds for Books, Braun, and the Ministry of Peculiar Occurrences.

For years, the Ministry of Peculiar Occurrences has enjoyed the favor of Her Majesty the Queen. But even the oldest loyalties can turn in a moment…

Having narrowly escaped the electrifying machinations of Thomas Edison, Books and Braun are looking forward to a relaxing and possibly romantic voyage home. But when Braun’s emergency signal goes off, all thoughts of recreation vanish. Braun’s street-wise team of child informants, the Ministry Seven, is in grave peril, and Books and Braun must return to England immediately.

But when the intrepid agents finally arrive in London, the situation is even more dire than they imagined. The Ministry has been disavowed, and the Department of Imperial Inconveniences has been called in to decommission its agents in a most deadly fashion. The plan reeks of the Maestro’s dastardly scheming. Only, this time, he has a dangerous new ally—a duplicitous doctor whose pernicious poisons have infected the highest levels of society, reaching even the Queen herself…