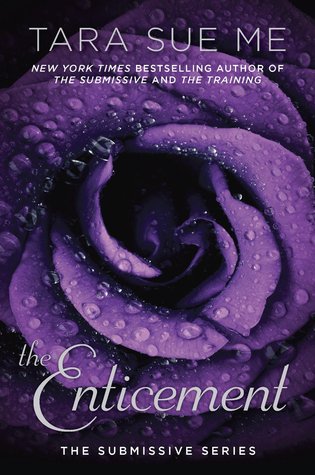 The Enticement
Author: Tara Sue Me
Reviewer: VampBard
Rating: A

So, I did a little backlist binge reading awhile ago. I picked up the first three titles in Tara Sue Me’s Submissive series after reading the first book in her Partners in Play series last year. The Enticement is giving me all the feels, folks. All. The. Feels.

First, I want to note I feel strongly that this book can be read as a standalone. Read: even if you haven’t read the other titles in the series, you won’t be banging your head against the wall wondering what’s going on. Ms. Me does a great job of giving background information without getting all info dump-y. Don’t get me wrong…the other books are excellent. The Submissive series is the journey of a couple. The. Journey. Not just a snippet or a moment in time. Okay, it’s not like the TV show 24 or anything…you get the idea.

The next thing I want to do is warn readers. Abby and Nathaniel have kids. They have a dog. They have real-world issues happening in their lives. If you’re reading to totally escape from your own life, this probably isn’t the book for you. On the other hand, that was part of the reason I gave this book an A rating. Also, there’s a near-miss sexual assault that could be a little trigger-y. There’s only one thing I view as a plot hole—a potential sub drop scenario that was never discussed between the couple, even after it was brought up by one of Abby’s friends. I gave that a serious side-eye and tried to not toss my Kindle across the room when the story ended and it hadn’t been addressed. This one thing is the reason I didn’t give this book an A+ rating.

Abby is really down-to-earth. I think it’s really hard for me to make friends because I ‘meet’ people like her in books and kinda want to be instant besties with them. The Enticement is written from her point-of-view, and it was perfect. Abby’s introspection makes me ask questions of myself, about my behavior, and to question the motive of my own actions. Abby keeps a blog: The Submissive Wife, and she’s offered a job with a women’s network. It’s pretty significant since she hasn’t had a job for a while. She’s been a stay-at-home mom, and she’s been content. Throughout the novel, in Abby’s thoughts while journaling, I found myself pausing to think about how this related to me and my life. It’s pretty cool that happened, because I don’t usually identify as much with female subs with a billionaire Dom as wholly as I did Abby. They don’t usually work, and they don’t have to juggle all the bazillion things I do. But hey, we read to escape, right? *nods sagely* Yup. Most of the time. What I liked most about Abby was how she reasoned through things. I don’t think I can vague that up any more, and y’all know I’m spoiler-free J Her reflections focused on her feelings, but even more than that, they brought her to understand Nathaniel’s perspective. It was nice to read about this type of thing. Not everyone has picture-perfect communication, and I think it’s healthy for us to reflect on our connections with others, as well as to communicate ‘where we’re at’ with our partners.

Another thing I really dug about Abby was that she didn’t go off hubby-bashing when she was irritated with Nathaniel. I kinda need to remember that. It’s been a goal, but seeing it in practical application (even if it was a fictional character), has renewed my efforts on this goal. Ultimately, Abby’s self-examination is what affected her growth as a character, and advanced the plot. I liked. A lot.

Mr. Nathaniel West is a Dom. He’s a phenomenal Dom. Abby loves and trusts him. He has her best interests at heart 24/7. It was really difficult to get a read on Nathaniel in The Enticement (and that’s probably the only reason I highly recommend reading the first three books prior to this one), but one thing that was evident was his devotion to Abby. Every time he pulled Broody Dom, it was warranted, and his choices were parallel to how I’d imagine they should be for this couple. Nothing sketchy or that gave me the heebies. I think what I like most about Nathaniel is that he’s willing to explain his choices to Abby. That, and he’s not afraid to bare his soul to her. I love me some vulnerable Doms. *fans self* The most interesting thing about Nathaniel, though, wasn’t his mastery of Abby’s body, nor his control, and not even the hot play scenes (because…it was). It was the aftercare. I was totally engrossed in the intimacy. I think those were my favorite parts of this title.

I’m pretty excited to get my hands on The Collar, Ms. Me’s next title in The Submissive series, due out July 7, 2015. I think reading more about Abby and Nathaniel, and how they continue to grow as a couple as their kids grow up, is definitely going to be interesting and I’m interested to see how Ms. Me handles it.

Limits were made to be pushed.

Abby West has everything she wanted: a family, a skyrocketing new career, and a sexy, Dominant husband who fulfills her every need. Only, as her life outside the bedroom becomes hectic, her Master’s sexual requirements inside become more extreme. Abby doesn’t understand Nathaniel’s increased need for control, but she can’t deny the delicious way her body reacts to his tantalizing demands…

Between Abby’s reluctance and Nathaniel’s unyielding commands, the delicate balance of power between the Dominant and his submissive threatens to shift. And as the underlying tension and desire between them heats up, so does the struggle to keep everything they value from falling apart …

4 responses to “Review: The Enticement by Tara Sue Me”