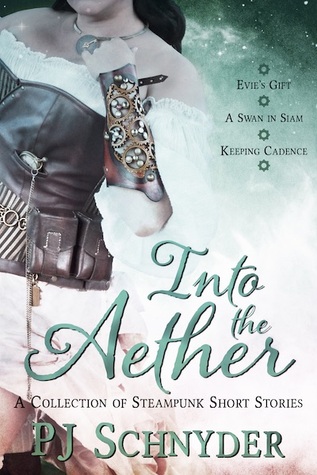 Today Una and Jen are here to talk about a new steampunk anthology from one of our favorite authors, PJ Schnyder.

Which was your favorite story in the anthology and why?

Una: Tough question since I enjoyed all three stories. I think I would have to pick Keeping Cadence (though it is a close race between it and Swan in Siam) since it was the most complete story, and I loved the happy romantic ending. Plus, I really enjoyed Cadence and was surprised by the twists in the story. Though it was a “love at first sight” story, it was really well done and not over the top.

Jen: I agree, my favorite is also Keeping Cadence for many of the same reasons. I found Cadence to be one of those favorite flawed, but super strong heroines that I could read about over and over. I also appreciate that it is a complete package with a strong storyline and sweet ending.

What was your favorite steampunk mech in the book?

Jen: I LOVED Evie’s mech “pet,” Toby, from Evie’s Gift. While it’s probably the most far-fetched piece of machinery, I loved how it worked with Evie’s unique gift and helped in all sorts of situations (like pinning up her hair or torn dress).

Una: I loved the “music box” in Swan in Siam.  The melody and the movements of it was enchanting, not to mention the mechanical quirk of it.

This question is for Una: Having never read any of the Ministry of Peculiar Occurrences books, what were your thoughts about A Swan in Siam? Did it pique your interest to read the series by Pip Ballantine and Tee Morris?

I loved it, I found it enchanting. The mixture of legends and steampunk was beautiful, and I thoroughly enjoyed it. And yes it has piqued my interest; it left me wanting to read more in that world.

And for Jen: Since you are a fan of MoPO, how well do you feel PJ’s story fit into the frame work?

Oh, this short story was really well done and fit perfectly into the Ministry world. But learning some unique mythology – something not from the UK – was exceptionally interesting and intriguing. I could totally imagine Books and Braun going to Siam some day and meeting Phailin.

Did you have any issues/concerns with any of the stories? If so, what?

Una: I really loved Evie’s Gift, but I was also really frustrated by it. When it ended, I was completely surprised that it was over. It was more of a prequel than a short story. I was left with more questions than answers. Plus, I really loved Evie; she is a character I could totally sit down and be besties with.  I really want to know the rest of her story.

Jen: I completely agree!! I was really getting into her story right up until it abruptly ended. I found Evie so fascinating and her prospects for romance were equally exciting. I expected the story to go on because there was so much left to tell, and then BAM! the story was over. I was frustrated by that.

Overall, how would you rate the anthology and what audiences would you recommend it to?

Jen: Overall I enjoyed the anthology quite a bit. It’s very short and easy to read in snippets here and there, whenever I had time. It’s a great sample of steampunk for those who may want to try but haven’t yet. It’s also fun for those who already love the genre. I like that each story had a different feel – different setting and time period, so you get a really nice cross-section of the genre. It’s like a sampler box of chocolates – you eat them up so quickly, only left wanting more.

Una: I loved it and would give it A.  I would recommend it to anyone that enjoys steampunk or as an introduction to those interested in steampunk. It has a nice blend of stories. Though I’d be sure to warn them that the first story is a prequel and will leave you wanting… but in a good way.

There you have it… Una and Jen both give Into the Aether by PJ Schnyder their approval and recommend it for fans of and those interested in reading steampunk.

Journey Into the Aether with award-winning author PJ Schnyder in a collection of daring and sometimes explosive adventures:

In Evie’s Gift, Evie travels to England with her brother to find a sponsor for her first season in London. She’s finding much more than intended, including an enemy submarine bent on destroying the airship carrying them across the ocean and a conspirator responsible for sabotaging her host’s mechanicals.

In A Swan in Siam, Agent John M. Alvey of the Ministry of Peculiar Occurrences searches for the source of a swan feather of peculiar properties in the court of the King of Siam and encounters both an assassin and a living legend.

Plus in the new, never before published Keeping Cadence, fiery Cadence is assigned as both gun expert and bodyguard when the senior crew of the Airship Vulpes is hired to transport precious cargo. Things never go as planned, but the two things Cadence can rely on like clockwork are her captain’s explosive temper and the opportunity for a good fight.

Purchase Info:
Into the Aether by PJ Schnyder

5 responses to “Joint Review: Into the Aether by PJ Schnyder”