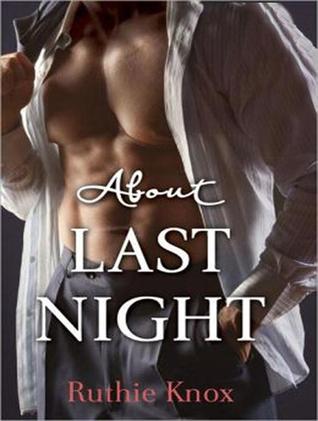 About Last Night is the emotionally rich love story between perennial screw up, American Cath Talarico, and high-bred British banker, Nev Chamberlain. The unlikely pair have an intense and immediate chemistry that they indulge in over and over, but only under a set of strict rules. Cath doesn’t want to fall in love, so she keeps Nev at a distance. Nev isn’t happy under his mother’s rules and expectations for his life, but plays her game. What develops between the pair is magical and perfect, yet messy. Their road to happiness is filled with both beautiful and ugly moments, but it’s the journey of survivors.

The story is shared from both Cath and Nev’s POVs. At first I felt that split between the two was unbalanced, and I wanted more from Nev’s POV. However, that apparent discrepancy fell away as I grew into the story – whether there was a better balance later in the book, or not noticeable because the story was so engrossing, I don’t know.

While it is obvious right from the start that all of their issues would come to a head eventually, I was pleasantly surprised with how it all came to be. I felt that Nev’s mother did act a bit out of character, but in the end, it didn’t matter because I thoroughly enjoyed the outcome. Their Happily-Ever-After is picture perfect and well-deserved.

The narration by Coleen Marlo is pretty good. I found her narrator voice soothing and enjoyed her performance of Cath quite a lot. At times I found that she reminded me of Renee Raudman, most especially her performance of Burn for Me by Ilona Andrews. Ms. Marlo’s British male voices were okay – with Nev’s being the best of the bunch and his brother’s most annoying. Sometimes the narration felt a little slow, but I didn’t like the sound at 1.25x (I listened at 1x speed).

Story Rating: B+
Narration: B

8 responses to “Listen Up! #Audiobook Review: About Last Night by Ruthie Knox”