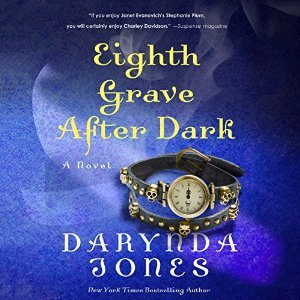 If you are a reader of my reviews, it’s no surprise to you that I have a love-hate affair with the Charley Davidson series. While Charley is one of my favorite characters in literature, she’s also one of the most frustrating. And after having several issues with the previous two books, reading Eighth Grave After Dark became a “make or break” book for the series. While I still had some issues with the book, it is by and large a step above the subsequent two titles. I did make one big change this time around… I listened to the audiobook rather than read the story. I realized that I needed to step away from the trappings of the written word and my note taking, and rather just sit back and enjoy the story. I think that went a long way towards helping me reconnect with Charley and the gang.

Picking up eight months after the conclusion of the previous novel, we find out that Charley and Reyes have moved into an old convent outside of Albuquerque – onto sacred ground – to keep the 12 hellhounds away from attacking Charley, Reyes, and their unborn daughter, Beep. The story opens with a special wedding between Charley’s Uncle Bob and her best friend and partner, Cookie. Unfortunately, evil doesn’t stop for the festivities, and soon Charley and Cookie find themselves working on a missing persons case for Special Agent Carson. And of course, Charley, once again, makes her own way into trouble.

As I mentioned, overall Eighth Grave After Dark was much better than the sixth and seventh books. Two of my biggest complaints with those books were 1) inconsistencies and continuity errors and 2) too many subplots and storylines, especially ones that didn’t give value to the overall story. I am very happy that Eighth Grave After Dark did not fall victim to these pitfalls. The primary storyline of the missing girl was entertaining and kept my interest, and I was glad it didn’t have any misdirects, although it did result in a trip Charley won’t soon forget. And per usual, there was a ghost who need Charley’s help, leading to another enjoyable subplot, again, with consequences that were a direct result of the storyline. Additionally, the book does a great job finally answering some long running questions that have been dragging from book to book.

Unfortunately, it’s not all sunshine and roses, as my biggest issue with the series is Charley herself. We are now in the eighth title and Charley’s seen and experienced many things. Her life has been put at risk, usually because of her own actions, too many times to count. She’s hurt and been hurt by Reyes because of lies. Yet, has our heroine learned one thing from all of this? Has she matured? NO SHE HASN’T. Not one bit. I can’t tell you how frustrated I was by some of the actions she took, knowing it could potentially damage her marriage or harm herself. And Reyes isn’t much better. He also kept secrets from Charley, resulting in her being put in harm’s way. I was very frustrated with Charley and Reyes’ interactions when it came to honesty and working together. While they are hot and steamy, I can’t get behind a couple that constantly disregards the other when making any type of decision.

As for future books… First, let me say that I will definitely read/listen to the next book. However, I’m not necessarily a fan of where the author takes Charley’s story at the end of the book. I loved what lead up to it, and was soothed a bit by Reyes POV after it, but I’ll reserve final judgement until after I see what happens next.

The narration of the story by Lorelei King was highly enjoyable, although it took me a couple of hours listening until I stopped hearing Mercy Thompson and Adam (another series Ms. King narrates). Listening to the title definitely helped me learn to enjoy this series again. Ms. King’s voice is perfect for the narration and Charley’s snark, but I was not as impressed with her male voices, and some of the male voices were difficult to distinguish.

In the end, I liked and enjoyed Eighth Grave After Dark, even with my issues with Charley and Reyes. Overall, the book flowed from one plot to another, and the storytelling was much less chaotic than in recent releases. I appreciate that most storylines were addressed, and I really liked the direction almost every subplot took.

Rating: B
Narration: B

With twelve hellhounds after her, pregnant Charley Davidson takes refuge at the only place she thinks they can’t get to her: the grounds of an abandoned convent. But after months of being cooped up there, Charley is ready to pop. Both metaphorically and literally since she is now roughly the size of a beached whale. Fortunately, a new case has captured her attention, one that involves a murder on the very grounds the team has taken shelter upon. A decades-old murder of the newly-vowed nun she keeps seeing in the shadows is almost enough to pull her out of her doldrums.

Charley’s been forbidden to step foot off the sacred grounds. While the angry hellhounds can’t traverse the consecrated soil, they can lurk just beyond its borders. They have the entire team on edge, especially Reyes. And if Charley didn’t know better, she would swear Reyes is getting sick. He grows hotter with every moment that passes, his heat scorching across her skin every time he’s near, but naturally he swears he’s fine.

While the team searches for clues on the Twelve, Charley just wants answers and is powerless to get them. But the mass of friends they’ve accrued helps. They convince her even more that everyone in her recent life has somehow been drawn to her, as though they were a part of a bigger picture all along. But the good feelings don’t last for long because Charley is about to get the surprise of her crazy, mixed-up, supernatural life…

11 responses to “Listen Up! #Audiobook Review: Eighth Grave After Dark by Darynda Jones”