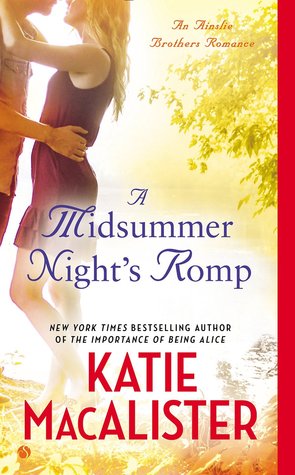 A Midsummer Night’s Romp is the second installment in the Ainsley Brothers series.  The Ainsley brothers are part of a large crew that have been adopted by Lord and Lady Ainsley.  Set in modern day England, there is no real money left in this unusual aristocratic family and each of the children must find their own way in the world.  Still, they are a close family and enjoy being in each other’s business.  A Midsummer Night’s Romp focuses on the second eldest Ainsley brother, Gunner, who still lives at the family castle.

Although this is not my first Katie Macalister book, it is my first read in the Ainsley Brothers series. I wanted to like this book more than I did. I did not read the first book. To me, A Midsummer Night’s Romp had a few gaps that might have been filled by the first book, but still, it is a complete story without it.  Be that as it may, I had issues with the premise of the story that I never got around.  I felt it had too many inconsistencies to allow me to fully enjoy the story.

The adventure has a morbid opening with protagonist Lorina Liddel saying goodbye to her best friend and roommate, Sandy, who has contracted HIV and is going to live with a cloister of nuns for treatment.  She will be out of contact with the outside world for a full two months. This is not a promising way to start a romantic comedy.

Before leaving Sandy encourages Lorina, a community college French professor, to use her summer vacation to do something fun.  She specifically mentions an archeological dig going on at the Ainsley castle where her foster sister Alice, has recently married the eldest Ainsley brother (The Importance of Being Alice.)  Dejected by the loss of her best friend’s company and prognosis, Lorina does some research and discovers that the man Sandy believes infected her is leading the dig at Ainsley Castle.  This is where the story goes right off the rails for me.  Lorina, someone presented to me as an academic, plans to represent herself as a freelance photographer, reasoning how hard can it be to point a camera, who’s doing a behind the scenes book to get on the dig site.  There, she plans to get close to the director, drug him, and get a blood sample so she can prove he, in fact, infected her best friend.  Regardless of how heinous I think the director may be, I’m supposed to be rooting and cheering for someone who is planning to misrepresent herself and commit a premeditated criminal act?  Yeah, I couldn’t go there.  This plan carries on for the first full third of the book, and I very nearly didn’t finish.

Thank goodness for Gunner Ainsley.  I liked Gunner, although he was probably a little too good to be true even for a romance novel.  He conveniently happens to be an actual photographer and saw through Lorina’s ruse from the beginning.  The banter that goes between Gunner and Lorina is meant to be funny and taken on face value, it is. However, Lorina is supposed to be an academic and no professor I’ve ever known comes off as seriously ditzy as she does. Making her a “community college” professor doesn’t lower my expectation of her thoughts and actions.  It’s insulting to community college professors.  She reads more like a teenager than someone in her early 30’s.  MacAlister further makes her an abuse victim who’s been in therapy for five years, yet she identifies and falls in love with Mr. Perfect inside a week.  Another eye rolling inconsistency.

The ending is predictable, but satisfying.  At least I knew the conclusions I made early on were right.  The true antagonist gets what’s coming, another Ainsley brother is married off, but Sandy is still infected and thanks to the antagonist, maybe more are as well.  That’s not really a happy ending.

Lorina Liddel is terrified of embarrassing herself on national TV as the face of Dig Britain!, a new archeological reality show. Lorina would much rather keep her head down and her hands in the dirt underneath Ainslie Castle, but her on-screen partner is proving to be a major distraction.

Brother to the castle’s current lord, privileged, perfectly sculpted Gunner Ainslie is a sure bet to keep viewers glued to their screens. Lorina intends to keep the ladies’ man focused on the job at hand, but Gunner is confident he’ll soon have the beauty falling into his bed.

When an unexpected find turns the academic dig into an all-out treasure hunt, Lorina and Gunner get swept up in the excitement. But when their steamy tryst is caught on camera, it’ll take more than an award-winning performance to get them out of the hole they’re in…

2 responses to “Review: A Midsummer Night’s Romp by Katie MacAlister”