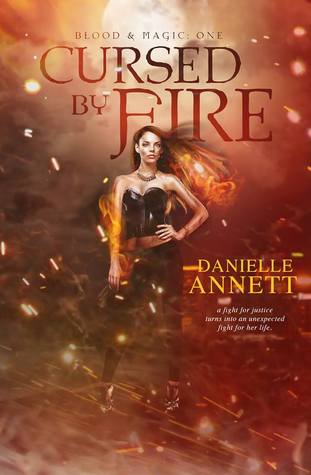 I am not sure what to say.  After reading Cursed By Fire, I wonder how a first novel in a series can feel like a transitional novel.  The story had promise but just did not deliver for me.

My first trouble with Cursed by Fire is that the mythology is very vague.  Some first novels suffer from an overabundance of world-building – spending a lot of time teaching us what the world is like at the sacrifice of the story.  However we have the opposite problem here.  There is almost no world-building.  What little there is are terms and certain elements that bring to my mind another series.  By the end of the novel, I started relying on the mythology of another series to fill in the gaps.  In fact once I started thinking about other books I’ve read, I saw similarities to other series.  I am all for imitation is the best form of flattery – but mythologies should be singular.  I can understand a coincidence or a common element or two but for so much of it to be similar bothers me.  Especially when the mythology overall remains vague and I feel we can only pull from our knowledge of the similar one to understand this world.  That just doesn’t sit right with me.

Taking this issue out of the equation of this review, I was not thrilled with the writing.  I felt that once I was at the end, the novel was a long goose-chase.  It felt like a transitional novel, getting characters into place for the next one.  The original mystery that started this novel is not solved by the end.  True, we learn a lot about players and an eventual war, but nothing was resolved.  People died, we know who killed some of them, we know the “agency” behind it, but that’s it.  There is no justice at the end, it just stops abruptly.  I’m not sure I would call it a cliffhanger because it was more irritating than engaging.

My other issue is that I was unable to connect with the heroine, Aria.  She felt flat to me.  I couldn’t connect emotionally with her and found her to be too chaotic.  Her thoughts and feelings really bounced around, and she made poor decisions of which she would question herself and yet still proceed to make.  For a woman that is to be tough and no-nonsense, I found her to be flaky and occasionally immature.  The love triangle that seems to be implied/established is strange in itself.  One is a good friend of hers while the other seems like the psycho killer.  Yet, is he a good friend or is his Alpha pushing him? Aria seems to jump into relationships, and I feel she makes some poor choices that are out of the character that she is supposed to embody.

Sadly I was really frustrated by this Cursed By Fire and am unsure if I will read the next one.  Part of me wants to for two reasons.  First, I hate judging a series by the first book, sometimes an author needs a first book to get established and it will have some issues.  Second, I am intrigued to see how Aria’s love interests turn out.  I think I would be willing to give the series one more shot to see if this world could stand out on its own.  If the world-building could take place and clarify issues so I’m not relying on other series mythologies.  I would also like to see the murder that began in this book be resolved in the next one.  If it is another goose-chase, I’ll be done.

It has been six years since the Awakening and peace in Spokane, Washington is still tenuous at best. The vampires and shifters are all vying for control of the city and the humans seem to be the ones suffering the consequences, or so it seems.

Aria Naveed has spent the last two years of her life fighting to make the many wrongs of the world right, but soon finds out that the humans aren’t as weak as they appear and may be a more terrifying foe than any of the other races combined.

When a stranger rolls into town with trouble on his heels, Aria finds herself trapped in the middle of a battle that could cost her more than she has bargained for as a fight for justice turns into an unexpected fight for her life.

2 responses to “Review: Cursed by Fire by Danielle Annett”