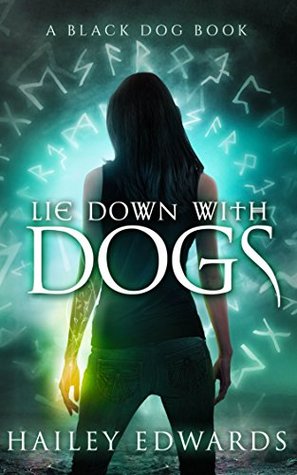 Wait. What just happened here?!? If you’ve been reading the Black Dog series by Hailey Edwards, you pretty much need to pick up this book now and binge-read it. Not kidding here, folks. If you’re a fan of fantasy (fae, incubi, and all sorts of other interesting critters roaming ‘round) and magic, this series should be on your TBR.

I really want to write up all the things I loved so hard about Lie Down with Dogs, but that’d be super spoilerific, and that’s not how I roll. I’ll get to some of that, but I wanted to talk about the rock I’ve apparently been living under. Until I actually went to Amazon and looked at the categories (and how well this title is doing!), I never thought I’d read a New Adult romance. *facepalm*. Being a smidge older than our illustrious heroine, Thierry, I guess I thought about how she was like college age, but never actually connected it to this whole ‘new adult’ genre that’s been cropping up like mushrooms after the spring thaw. I never sought out this subgenre of romance, because I didn’t think I’d connect with the characters. Obviously, since I’m closer to fifty than forty, I’d be hard-pressed to ‘get’ the character. Totally not the case. This was a bit of a revelation for me, and it really made me pause. It doesn’t MATTER what the subgenre is, really. It’s about the characters, the plot, and those beautiful moments when we can immerse ourselves in another world—if only for a moment.

The conflicts present in the newest in the Black Dog series were tightly interwoven. Think: fifty bazillion-thread Egyptian cotton sheets here, folks. Here’s the one thing I *will* tell readers about this book: isolated incidents are rarely isolated. Especially when Theirry is concerned. I think a computer server would explode with all the redirects readers were treated to in Lie Down with Dogs. And, don’t get me started on betrayal. I got that raised eyebrow thing going on at one point, and I was ticked off on Theirry’s behalf several times.

So, in Lie Down with Dogs, we get more of kick-ass Thierry. We’ve watched her develop from a starry-eyed cadet just learning about all the weirdness she’s been born into, and evolve into a woman with a mind of her own, and a sarcastic side that manages to keep the tone of some heavy topics in the novel light. Looking back, I like where Thierry is heading as a character. We get less of the wet-behind-the-ears, and more of the I-know-what-I-want-and-I’m-going-after-it. Watching Theirry grow in her relationships, wrestle some inner demons (*snort*), and deal with the immense responsibility that’s been thrust upon her was nothing short of miraculous. Amazon estimates Lie Down with Dogs at 216 pages. To cram in all the character development in so few words is a Herculean feat, and Ms. Edwards pulls it off flawlessly.

I have to talk about Shaw for a minute, too. Even though we see Shaw through Theirry’s point-of-view, I think we learned a lot about him in Lie Down with Dogs. We get a smidge more about his backstory, and about some of his missing time in previous titles. I really liked this aspect of the book. I liked the evolution of Shaw’s relationship with Theirry as well. Shaw seemed all alpha male and chest-thumping in the beginning, but we see a different side of him. He’s endearing, and while he’s still a bit of that alpha-chest-thumping-male, he humbles himself before Theirry in a way that made my heart melt.

While political unrest still thrives in Faerie, it’s breaching into the mortal world and causing havoc…in an understated, below-the-radar-for-now manner. Theirry is at the center of the upheaval, and facing a choice no one her age should have to make. And I can’t wait to read about how everything unfolds in Old Dog, New Tricks, the final title in the Black Dog series, slated for release July 30, 2015.

With tentative peace established in Faerie, Thierry returns to her job as a conclave marshal in Texas while the countdown to her coronation begins. But what happens in Faerie doesn’t always stay in Faerie. A crown wasn’t Thierry’s only souvenir from her trip. Her new husband, Rook, is scheming again, and this time his plans are invading her dreams.

When her best friend throws a beachside going-away party, Thierry is grateful for the distraction from Rook…and from Shaw. But her presence in Daytona rouses an old evil, one who wants the future queen as the crown jewel of his private collection.

One response to “Review: Lie Down with Dogs by Hailey Edwards”