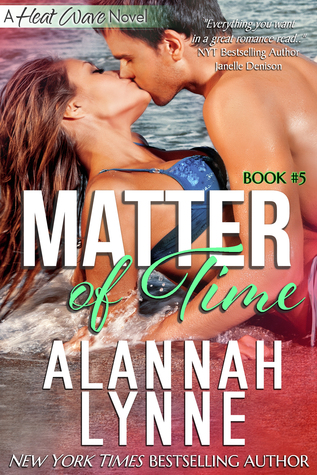 Fifteen years ago, as she was finishing college, Lizbeth Sanders was ready to move on with life and her start her HEA with motor cross racer Logan Steele. Then suddenly one day, Logan walked out of Lizbeth’s life to help raise a baby he didn’t know he had. Fast forward to present day, Lizbeth has a successful career, but her personal life has remained empty since Logan left all those years ago. After she runs into Logan’s twin, Lucas, plans are set in motion to bring Logan and Lizbeth together again.

Matter of Time is a lovers-reunited, happily-ever-after story, with a few twists along the way. Overall it is a decent story; however, I had a few issues with the whole romance and plot line, reducing my enjoyment of the story. While I am glad Logan and Lizbeth find their way back together, the fact that he stayed married as long as he did, had three kids, and didn’t realize there were some serious issues at home, rubbed me the wrong way. Similarly, the fact that Lizbeth never, ever had ill feelings towards Logan for leaving her and “doing the right thing” seemed utterly false to me. I’m sorry, but there is no way that someone hurting that badly, for so long, never got mad at the person that left her. Multiple times I felt Lizbeth was “too nice” making her character come off as fake. And while their reunion was hard, fast, and intensely passionate, showing they are highly emotional people, their feelings about how the previous fifteen years went down feels sterile and detached.

As expected, Lizbeth and Logan don’t have an easy road, and his ex, Bobbi Jo, is cause for most of the problems. While I get Logan is a caring father who loves his kids, how he responds to the issues thrown at him went too far and irritated me. I also didn’t like how guilty he feels about spending time with Lizbeth. Additionally, I (once again) have issues with Lizbeth’s overly generous nature and how far she is willing to go to make everything work out. All-in-all, their match just rubbed me the wrong way too often.

Although Matter of Time is the fifth book in the Heat Wave series, it can be read as a standalone. The story had some good moments, and the couple had some intense and passionate times. Unfortunately I found the characters annoying too often. Lizbeth is too perfect and forgiving. Logan is a hot mess. His ex is conveniently psycho. The story had too much drama, and it just didn’t work for me.

Reviews in the Series:
Going All In by Alannah Lynne (Heat Wave #4)

4 responses to “Review: Matter of Time by Alannah Lynne”