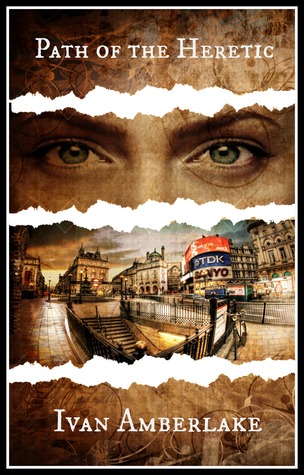 The Path of the Heretic is the second novel in the fascinating mythology of the Beholder series.  Though the mythology is intriguing, the story falls flat for me.

I tend to prefer novels with character-driven plots. And in order for those plots to flow and keep me reading, I need an emotional connection to the characters. Unfortunately, I couldn’t find it in the previous novel, The Beholder, and sadly I wasn’t able to do it in this second installment.  The problem is that I can’t really put my finger on what is the weak link, what is blocking me from connecting to the characters.  The plight of Jason is compelling, his search/hope for his lost love, Emily is interesting, but I just do not feel the emotions.  I don’t know if it is an issue with how the author conveys the character’s emotions or just a personality type issue I have with the characters.  Additionally, most of the urban fantasy I read has stronger romantic elements to it, while this does not.  I was compelled to finish the book, but that was only to see how the mythology turned out and if the prophesies would come to pass, along with a couple other loose ends.

The world continues to be interesting; I do find the mythology fascinating.  Through Path of the Heretic we learn that there are more than just Lightsighted and Darksighted people.  There are the Transcended – those that switch sides.  This comes into play heavily in this novel.  What seems like betrayals are sometimes either Transcended spies or someone being compelled to change from one side to the other.  The politics are intriguing, the webs that the Darksighted (most importantly Pariah) weaves are interesting but some of it had me a little lost.  The legend of the Heretic was a bit confusing as well.

One aspect of the novel really did irk me though and that is the multiple first person point of views – more than in the previous novel.  When we have more than a few it can be a little confusing constantly changing perspective.  I like getting into a character’s head and being there for a bit, it allows the story to flow better.  However, this is not the only issue.  Sometimes when the story changed perspectives, the timeline went back to the previous scene to allow another character’s perspective of the recent scene.  This was horribly confusing.  I had to stop and reread to figure out we were reliving a previous scene.  Sometimes it was just a few minutes while other times it was to the time period before the scene happened.  This time bouncing really annoyed me and distracted me from the flow of the story.

If you are really fascinating and love rich and intriguing new worlds, you may want to give The Beholder series a try.  It is true urban fantasy without the emotional romantic subplots.  I’m not sure if I will read the third book due out in 2016.  I prefer more emotional connections in my urban fantasy, but for those that enjoy more action and cerebral urban fantasy; this may just appeal to you.

After Emily Ethan is gone, Jason is left with too many questions unanswered. Betrayed by the one he loved and yet hurting after losing her, Jason is eager to find out what actually happened to Emily.

When he least expects it, the Darksighted return to New York City, but they are not after Jason. They seek to destroy those who may know something about where Emily can be.

The more Jason gets to know the world of Energy and Sight, the harder it is for him to belong in this world. He can’t enter the Sight when there are too many people around. And then Emily comes to his dreams and gives him clues of where to look for the answers.

The question is: should he believe her, or is it just another attempt to get him killed?

Purchase Info:
Path of the Heretic (The Beholder #2)