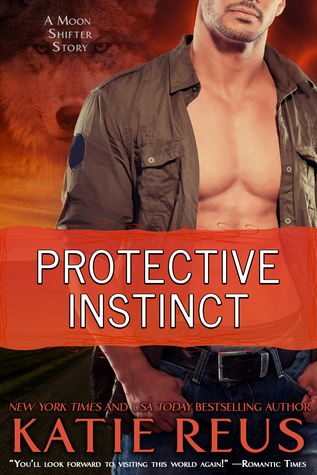 For fans of the Moon Shifters series, this novella is a must. It nicely ties up Ryan and Theresa’s relationship. Gikany and Una enjoyed it.

We have been interested in seeing Ryan and Theresa finally consummate their mating.  Of course, Ryan has to be sure his abilities won’t cause the same tortured relationship his parents had.  However, once Ryan started listening to his mate, the pieces finally fell into place.  We enjoyed seeing them finally come together.

The antagonist for the story was evil, her path for vengeance palpable, and it really was a great overall story. This overarching plot line for the story really helped to bring Ryan and Theresa together.  The reasoning behind the antagonist’s vengeance made perfect sense, and we enjoyed how she calculated her revenge and was ultimately thwarted.

We wouldn’t recommend Protective Instinct for newcomers as it is the culmination of a relationship that started in previous novels. It was a great and fun read.  The vengeance storyline was gripping and believable.  Though Ryan was being pigheaded and dense, it was great when he finally woke up and went after his mate.

A woman worth fighting for…

Wolf shifter Teresa is blown away by her packmate Ryan’s honesty about his past and his rare empathic powers. She wants him in her bed—and her life. The only problem: Ryan insists they wait, because the last thing he wants is to recreate the hellish family he grew up in. Frustrated, Teresa jumps at the chance to assist a packmate off the ranch—far away from Ryan.

On the way, their vehicle is run off the road—and it wasn’t an accident. Ryan rushes to Teresa’s side, determined to protect her. But there’s a dangerous enemy lurking in the shadows, and if Ryan doesn’t break out of his old thinking and put his faith in his and Teresa’s love—and their ability to overcome obstacles together—it will be too late.

One response to “Review: Protective Instinct by Katie Reus”