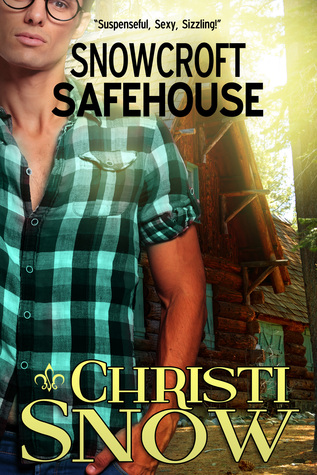 One year ago, Declan Jasper, aka “Dex,” lead singer of a famous rock band, lost his bandmates when a rigged explosion onstage killed them all. Now known as “Finn Alexander,” he’s the reluctant pawn of the FBI, hiding out in the tiny town of Snowcroft in an effort to keep him alive until he can testify. Getting involved with someone in the midst of all the chaos is the last thing he has in mind. But, there’s no denying that the reserved, gray-eyed man behind the bar in a local tavern draws him like no one else has since before his world fell to pieces.

Jack Walker is the single father of a middle school student, his restaurant and bar is painfully understaffed, and staying lonely and closeted for the sake of his daughter is becoming more and more difficult to bear. That he can’t get the quirky, sexy new band teacher at her school off his mind is an unwelcome addition to the pile, to say the least, and resisting the man is crucial to keeping his world from spinning out of control. Still, something has to give, and soon, and following his heart might be the very thing to save him after all.

Although I enjoyed the first story in the series, I liked this one even better. There seemed to be an easier feel to the interplay between all the characters, and a more confident tone all around that Snowcroft Lost, in retrospect, didn’t achieve quite as uniformly. Any awkwardness stemmed from the uncertainty between Finn and Jack and made those scenes more earnest and believable than they would have been otherwise. The tension in the story also builds along two distinct lines, and Ms. Snow does an admirable job maintaining their separateness without letting the reader forget either one. I did have a little bit of trouble accepting the necessity of the extremes Finn’s nemesis goes to in the end, but it definitely left a strong impression.

There’s actually quite a bit going on in Snowcroft Safehouse that could have had a negative impact on the story, yet doesn’t. One man is closeted, one isn’t. One has a child, one doesn’t. One of them has lost everything. The other has everything to lose. Nevermind the bogeyman lurking on the periphery, waiting to pounce. The constant doubts about a long-term relationship between Jack and Finn that is present throughout the narrative might easily have been too much. As it turns out, it worked just fine, and I couldn’t turn the pages fast enough.

The cast of characters in Snowcroft Safehouse are some of my favorites in the series so far, and each has a nice balance between their backstory and present situation. Though we met him briefly in the Snowcroft Lost, it was good to have more insight into Jack’s circumstances and his struggle with coming out. While I liked both men a great deal, I was drawn in the most by Finn/Dex, who is open, and struggling, as well as both fatalistic and hopeful all at once. This former bad boy shines no matter how he tries to hide it, and he deserves every bit of his happy ending. And, speaking of HEA’s, I especially hope to see Law get his in the next book. Poor Law. I think I may love him most of all.

As far as sequels go, Snowcroft Safehouse is a good one, and, although it could stand on its own, I recommend reading the series from the beginning. The small-town atmosphere of the place lends a familiarity to the stories, and allows the connections between many of the characters to seem more authentic. Finn and Jack are a wonderful pairing, partly because neither man seems inclined to exercise much restraint when it comes to their physical inclinations towards each other, among other reasons. Despite my reservations about parts of the final showdown, Snowcroft Safehouse ends very well, with enough of temptation about what might come next to leave me anxious for another round.

A year ago Declan Jasper was entertaining sold-out arena crowds as the lead singer of Black Rainbows. But that came to an explosive end when the band got caught up in a criminal cover-up, one that ended with the entire band dead. At least that’s what everyone is supposed to think.

Now, Dex is hiding in plain sight, working as the school band director in a sleepy little mountain resort town while under the protection of a hard-nosed FBI agent. Instead of eyeliner and black leather, he now wears glasses and corduroy. Instead of having sexy coeds—both male and female—throw themselves into his bed, he’s dealing with teenage angst and grumpy parents.

At the top of his troubles list is Kelsey Walker, a junior high bundle of rare musical talent in the form of one confused, messed-up adolescent. Dex figures the problem comes from her broken home and wants to help. But when he meets her father, sexy bar-owner, Jack Walker, he realizes that instead of helping he’s probably just bringing more trouble and danger to their door.

Dex has to stay alive until the trial to bring his bandmates’ murderers to justice, but can he do that if it means sacrificing his own happily ever after?