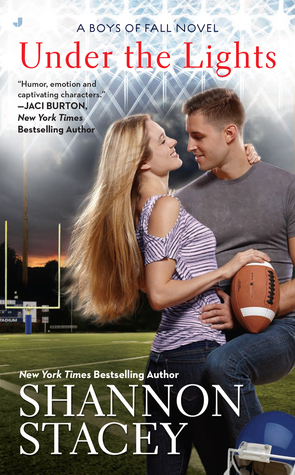 Chase Sanders has hit a bump in the road. His business partner drained the accounts, took the money, and ran, and his (now ex) girlfriend left him for another guy and is moving out. So when Kelly McDonnell called asking for his help to save her father’s job as coach of the Stewart Mills High School football team, Chase decided to take a couple weeks and heads to his home town.

As Coach’s only child, Kelly McDonell is determined to help her dad and the town she loves by saving the high school football program. She’s rounding up the players from the Eagle’s first state championship to come home and help with fundraising. Seeing Chase brings back old crushes and hurt feelings, as well as new adult temptations.

Under the Lights is the first in a new contemporary romance series from Shannon Stacey. I absolutely adore her Kowalski family series and was excited to read this new endeavor. While on the surface, the small-town New Hampshire setting is similar to that of the Kowalskis, Stewart Mills is nowhere as idyllic. The town and its citizens have fallen on some hard times, and this permeates through and shapes the characters and tone of the book. While the book is by no means a downer, it deals with real-life hard times and lacks the happy-go-lucky feel of the Kowalski series.

With that said, I enjoyed getting to know the residents of this small town. There are the eccentric and the down-to-earth, and all in between, who are looking to regain hope after the closure of the mills and furniture plant. Ms. Stacey pens more than poignant one scene depicting the disheartened conditions, one of which touched me so much that made tear up. Watching the town, and especially the high school kids, regain hope through the fundraising process is rewarding.

The romance between Kelly and Chase is slow moving. Both individuals come from broken relationships where the significant other cheated on them. Neither is looking for anything long term, and both have mental roadblocks and reasons for not even hooking up. The reasons are valid, making both Kelly and Chase squirm with desire while mentally trying to remind him/herself of why they cannot have an affair. Luckily, they eventually cave into their lust, but even after that initial hookup, things move slowly. And while I enjoyed seeing their relationship build both sexually and otherwise, I was annoyed by the number of negative attitudes towards the pair as a couple. Misunderstands also caused problems, but Chase and Kelly find their way around the mess.

Overall, Under the Lights is an enjoyable story and sweet romance. While the general tone is a bit more serious than I’m used to from the author, it wasn’t overly sad nor dramatic. But the picture Ms. Stacey paints is one of rough times, which brings the mood down a notch. I liked Chase and Kelly together, but it was hard dealing with all of the negativity. Their journey to romance is realistic with a happy ending, enjoyable and nostalgic.

They were the golden boys of fall: Stewart Mills High School’s legendary championship winning football team. Fourteen years later, they’re back to relive their glory, save the team—and find themselves again…

Chase Sanders’s life has taken a lot of crazy turns lately. But returning to his hometown to help his old coach keep his high school football team afloat might be the craziest thing to happen to him yet. That is, until he starts falling for the last person he should—Coach’s gorgeous daughter…

Kelly McDonnell learned the hard way that cocky, charming men are nothing but trouble, so she knows Chase is bad news. Still, she can’t resist his smile—or the rest of him. But when his loyalty to her father conflicts with their growing attraction, any hope for a relationship might be blocked before it can even begin…

Purchase Info:
Under the Lights (Boys of Fall #1)

8 responses to “Review: Under the Lights by Shannon Stacey”